As the mega-project pushes boundaries and sets a benchmark for SA’s new mixed-use living.
By Ray Mahlaka 24 May 2016  00:06 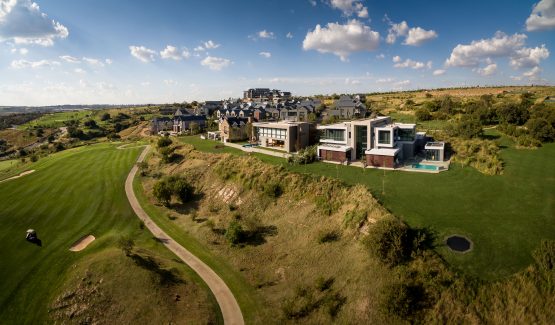 Insurance magnate Douw Steyn’s much talked about Steyn City, sandwiched between swanky Dainfern and low-income Diepsloot in Johannesburg north, is rapidly taking shape – with the developers now forging ahead with the second phase.

Having launched the first phase early last year to the market – comprising of 93 one-, two- and three-bedroom apartments, 70 stand-alone homes and clusters and 220 freehold stands – a total of 53 new freehold stands were released in May for sale as part of the second phase.

This follows what the developers believe to be record sales from the first phase, which achieved more than R1.5 billion worth of sales in 12 months for sectional title apartments, clusters, freehold homes and stands.

Giuseppe Plumari, the CEO of Steyn City and developer behind the project, says 80% of all stands launched in the first phase have already been sold. Freehold stands, which range between 1 000 square metres and 3 000 square metres, and are priced at a cool R3.6 million and R12 million, allow buyers to build their own homes.

Plumari believes that the appetite for Steyn City among cash-flush buyers has been supported by the enclave’s live, work and play offering on a grandiose scale. “It’s the lifestyle at Steyn City that appeals to people. The resort is pedestrian friendly with safe public spaces such as parks, jogging and cycling tracks, equestrian centres and tennis courts. The lifestyle has been designed in a way that you never have to leave home. You’ll be able to access everything you need – from fuel to groceries – on site,” Plumari tells Moneyweb.

The developers are also reporting a spike in apartment sales. All apartments at Oasis, Steyn City’s apartment building, have been snapped up by eager purchasers. Developers have broken ground on 105 new two- and three-bedroom apartments, which are scheduled for release this year.

But expect to pay a premium for a lifestyle at Steyn City. Based on the first phase offerings, a 74 square metre one-bedroom apartment starts at R1.6 million, while two- to three-bedroom apartments covering up to 149 square metres fetched up to R3.9 million. Cluster homes range from R6.2 million to R8.4 million and include mostly four bedrooms with an average floor size of 350 square metres. Homes at Steyn City are believed to be “20% to 30%” more expensive than what is offered in Dainfern estate.

The estate also has a luxury apartment offering, which costs R13.9 million with 350 square metres floor space. On a rand per square metre rate, luxury apartments at Steyn City fetch R30 000 to R40 000, which is in line with what is being offered in Johannesburg’s Sandton and Melrose Arch.

“Although properties are reasonably expensive, if you take into account the investment made in the infrastructure, you will realise that value for money is here.  You are not going to be able to replicate what we have done here,” says Plumari.

The development, which started in 2006, has so far seen investments to the tune of R6.5 billion. At the start of the development, Plumari, who has been in the construction industry for 40 years, owned close to 200 hectares of land between Dainfern and Diepsloot. He partnered with long-time friend Steyn to accumulate a further 800 hectares. The master plan was drawn up to relocate about 200 000 citizens of Zevenfontein (a squatter camp which was located on the Steyn City site) to Cosmo City.

Plumari also partnered with the government to roll out new surrounding roads, sewerage and water infrastructure in a bid to obtain municipal planning approvals. The R511 William Nicol Drive was upgraded in the vicinity of Steyn City, to expand arterial routes into six lanes as well as pedestrian and cyclist lanes – a laborious exercise which set the developers back R300 million. In February, the second phase of the William Nicol Drive upgrade was announced. The R576 million worth upgrade will see improvements to the road as far as the N14 highway, where the road connects with the newly upgraded M26 to Pretoria West. The new project, which is partly funded by Steyn City, includes further upgrades of several interchanges including Rose Interchange and a bridge over the Diepsloot River – which are all are expected to be completed by September 2017.

The idea of the development, which rests on 2 000-acres of land, is to develop an “estate like no other” with a hospital and 50 000 square metres of commercial space in the pipeline. The commercial offering at Steyn City will follow the establishment of Auto & General’s head office along William Nicol Drive, which was completed in 2013.  A retirement village, a primary and high school and two retail centres are expected. These pending developments are part of phase two.

On a visit to Steyn City by Moneyweb on Friday, bulk earthworks had begun on the site where the not-yet-announced school will be along the estate’s entrance on Cedar Road, which is expected to be completed mid-next year.

There’s no doubt that the developers have invested heavily in Steyn City, which was viewed by many as a pipe dream. To date, more than 12 000 job opportunities have been created for people from nearby Cosmo City and Diepsloot.

Although Steyn City has been less publicised than similar developments of its kind, press coverage has centred more on Steyn’s R250 million private residence, which trumps the cost of President Jacob Zuma’s Nkandla. The home of Steyn, the low-profile founder of Auto & General, is a 3 000 square metres Tuscan mansion boasting waterfalls, terraced gardens and overlooks the lush 18-hole, Nicklaus-designed, golf course.

Plumari says it would not have made sense for information on the development to be announced if there was nothing to sell or show. “We did not want to sell a dream or a piece of paper; we wanted to sell the real thing,” he adds.

The total completion of Steyn City is still fluid and the infrastructure costs are expected to be more than R7 billion. “The phases involved are going to depend on the uptake of our offering. There are at least another two phases after this one [phase two],” says Plumari. Upon completion, Steyn City will be six times the size of the Sandton CBD.

Over the past 10-years, upmarket golf estates have been popular with the well-heeled retreating behind high walls and beefed up security. Among the big-ticket estates to have emerged are Century City’s Waterfall Country Estate and Village located between Midrand and Pretoria in Gauteng, Cape Winelands golf estate Pearl Valley and polo estate Val de Vie, and Zimbali Coastal Resort near Ballito in KwaZulu-Natal.

“Although luxury market buyers are under pressure, the estate housing market, in general, doesn’t dip as low or peak as high as the rest of the luxury market. We, therefore, expect it to outperform the luxury market during the current downturn,” says De Kock.

Over 50% of estates – which include golf, equestrian and polo, coastal, lifestyle, country and wildlife estates – are located in Gauteng and a further 25% in the Western Cape. The average price of an estate home is R2 million – nearly three times the national average of R700 000 for a home, figures from Lightstone show.

Bring it down a notch

But estate living has attracted criticism for only targeting higher-end individuals and not being accessible to the middle and lower class. Says associate professor at the University of Cape Town Francois Viruly: “What we have not seen in SA is mixed-use developments that have come down a few notches to accommodate lower income groups. In fact, much of the mixed-used schemes have denied lower income groups access to housing.”

But this is where the public sector could steps in, as Viruly believes that it can be a catalyst for affordable mixed-use developments offering social housing, which is one of the contentious issues since SA’s democratic dispensation in 1994.

Where and how do so many people get to have so much money?

What, no kraal, chicken run, fire-pool or tuck shop? Essential for modern living.

This Fourways area needs the Gautrain – traffic is a mess. Gautrain should run from Sandton through Fourways, to Lanseria Airport.

….estate living has attracted criticism for only targeting higher-end individuals and not being accessible to the middle and lower class.

Love it. The vision of this guy just great. Those living there must enjoy and have fun. Me??? I will stay where I am, retired and from my office at home I have a sea view, watch ships pass by, different everyday.

What happened to the old adage of Location, Location, Location? First, the decision to relocate a squatter camp may come back to haunt the developers and home owners in years to come. Second, I’m not so sure I want to live along a river when there are scary stories of pollution/ sewage. Third, even the road upgrades will not ease the traffic situation in that area.

There is a cost to all of this!
Levies over and above the other municipal charges.

The levy funds the lifestyle, and can become burdensome!

This can be a cash-burner!

yeah I cannot see any reason at all to live here. be like being stuck in the Truman show except for when the great unwashed rise up from next door.

and anyone who knows JHB knows that road ……. who tf would make an election to drive that road every day !?!?!?!?!