The difference in rental growth between provinces is stark. Picture: Moneyweb

The growth in weighted average national (residential property) rentals has halved from a year ago and, as of June 2018, is at just 3.27%. A year ago, according to the PayProp SA Rental Index for Q2, this figure was 6.76%.

Because of the subdued rental market, PayProp makes the point that “the actual price of goods rose even more than the inflation rate of 4.6%”. It adds that the upward trend in inflation was “to be expected after the increase in the Vat rate in April”.

Statistics SA reports inflation for “actual rentals for housing” (for the country as a whole) as 4.2% year-on-year in June 2018.

According to PayProp, the weighted index has been below 5% for all of 2018 so far. The last time growth dipped below 5% – based on historical rental index publications – was in 2014. It must be noted that this followed a period of strong growth following the recession caused by the global financial crisis.

A separate report from rental credit bureau Tenant Profile Network (TPN) – its Q2 Residential Sector Vacancy Survey – shows that vacancy rates increased to 7.9% in the quarter. For properties with rentals higher than R12 000 a month, vacancies are nearly double that, at 14%. TPN’s rating for demand continues to decline (70.49% in Q2), with the overall market strength index of 54.71 moving very close to equilibrium (50). The market strength index per price band shows the disparity between activity in the lower end versus the upper-middle and higher end of the market. Regardless of band, however, the trend in market strength over the past two years is clear.

The difference in rental growth between provinces is stark, but perhaps expected. PayProp makes the point that “the top three provinces by weight (contribution to GDP) are Gauteng, KwaZulu-Natal and the Western Cape, [and this] explains much about the lower national growth rate – it’s thanks to the disproportionate influence of lower growth rates in those provinces.” Growth in the Western Cape “slowed to just 6.97%” in the quarter: “This is the lowest rental growth we’ve seen for that province since Q4 2012, when the year-on-year figure was 6.44%. That being said, average rent levels are still highest in the Western Cape at R8 805, compared to the weighted national average of R7 359.”

How do the rest of the provinces measure up? 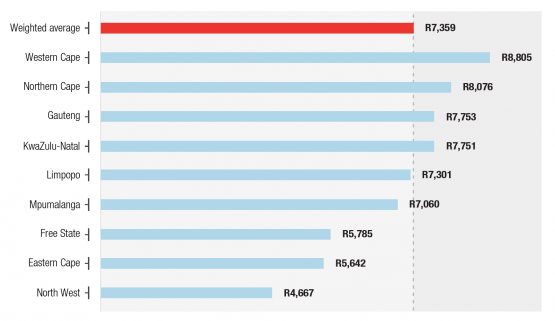 Of concern is the picture in the Western Cape over the past five years. In its report, the rental platform provider notes that the fastest growing province “doesn’t show any clear peaks and troughs”. Rents continued to grow at around 10% throughout. “The two lowest points over the period are the first and last quarters, so one could view the entire period as one long cycle.”

Compare this to other major provinces, where there is clear evidence of two cycles over the period. PayProp argues that it is “completely normal for rental growth to go through cycles”, and thus it expects the Western Cape to “normalise”, in other words “have clearer cycles”, in the quarters to come.

In an unambiguous warning, it says that “if provincial cycles are anything to go by, the Western Cape is at the start of a declining cycle. It is likely that there will be at least two more declining quarters before we can expect an upturn.”

Paradoxically, the historical trend could represent good news for Gauteng, if we take the “judging by the previous cycles, it is very possible that we’ll see signs of recovery within the next two quarters” long-view.

In the Q2 Rental Index, PayProp has not provided any update on the arrears trends it published in Q1. By March 2018, the percentage of tenants in arrears had jumped to 23.2%, from 18.5% in April 2017. It points out that this translates to only “76.8% of tenants” paying “their rent in full every month”. One in four doesn’t.

The days of landlords banking on ‘guaranteed’ 10% (or even high single-figure) annual escalations in rent are long gone.

Best news ever!! We’ve been taken to the cleaners by landlords for years as it’s “expected” that as lessee “you have to pay by bond payments and/or lifestyle”. I’ve got no sympathy for any landlord as most, but not all, are only in it for the money/quick buck. A monthly income can only go so far and it’s horrendous what’s happening with pensioners in a rental sector where greed has overtaken common sense. It’s been reported on Moneyweb that as of 2000 the year on year salary increases in the private sector was only 5% p.a. and not the astronomical year on year 14-15% p.a. for government/municipal employees. It therefore stands to reason that a lessee cannot afford a 10% year on year rental increase. After all would you pay R5000.00 p.m. for a “one bedroom, 1 bathroom, kitchen/sitting, no garage/undercover parking, excludes water and electricity”????? On inspection the “flat” is a double garage which had been illegally “chopped” in half. Average double garage 21 square metres – your “1 bedroom flat” therefore only the size of a kitten basket for which the “landlord” expects you to pay R5000,00 p.m. The Rental Board should’ve been scrapped and I’m of the opinion that it should be re-instated as protection for lessees being ripped-off due to greed.

Oh WoW!! What Magnus has been saying and everybody with a brain figured out 10 years ago. BTL in SA is dead despite what Loos say.

Buy to let can still be be a brilliant investment but its certainly not for the everyday numbty as it requires nuanced understanding of property and a very hands on approach (including adept plumbing skills)
Ignore these projections as blanket generalisations never mean a thing especially when the shrewd investor can grab a bargain in the right location.

So you think that it will turn, and that landlords won’t just keep getting squeezed by rising levies/electricity/maintenance/vacancy rates as appropriate?

Been waiting for the bottom for a while, I’m not convinced that the right time to jump in is yet. Think I’ll just wait until the economy starts firing before I expose to more SA property…

I agree, there are instances where buy-to-let can be profitable(very even), in my case, I bought my personal house for cheap (It did need some TLC, nothing a few weekends can’t fix) and there was already a outside building thing that was just screaming to become a granny flat, I am almost finished doing my final building on the granny flat, and once it is done, if I have a paying tenant 9 out of the 12 months in a year my yearly rental yield will be 28% and then we are not even factoring in the rise in my home value as well.

Oh, how we long for the happy days during the property boom (from 2003 – 2007), along with Resources super-cycle, when many less-experienced people “popped out of the woodwork” to suddenly rise as a developer or builder 😉

The WC is expected to experienced a breather in property values, as they’re so far ahead in the value-race from the rest of country.

(Btw, that’s a beautiful UK or US-style house in the article, with low hedge & picket fence gate. Without high walls or steel palisades!)

So, in such a society the investment case for buy-to-let is for the rent income to cover the rates and taxes. The bond is your problem, this is your punishment for being a capitalist land-owner in a socialist society.

As a part time landlord I can only say that I am very happy to soon be an ex landlord. Fixed costs ( rates, etc ) climb at 10 % per annum or more, tenants fail to pay on time and some not at all. Some have to be evicted owing 6 months rent or more and properties are, more than often, left trashed when they do move out. I would say a 10% loss on a building assuming it is fully let which is not always the case. Not for the faint hearted!!

The yield is one, affordability is another. We need something like a Schiller index rather than all the other stats, it will show the size of the bubble in especially CBD Cape. The developers and their bankers with R90,000 per square meter apartments that yield 4% rental even at rentals that now exceed office space rentals need to tread carefully. In 2008 crisis the banks eventually owned most of the new golf course estates, they might soon add a few thousand apartments