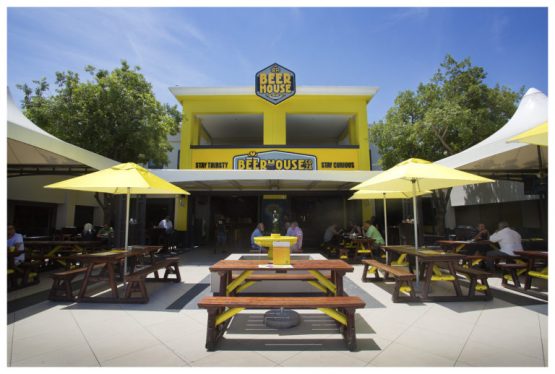 The FSCA does not have charity crowdfunding in its sights – it is instead looking at cases where investors become shareholders. Picture shows Beerhouse Fourways. Image: Supplied

The Uprise.Africa platform is hosting a crowdfunding initiative for a Beerhouse that is set to open at the site of the former Starlight Diner in Tygervalley in October. Renovations began this week.

This will not be the first beer business to raise equity via the platform. Inge Prins, founding member of Uprise.Africa, says it has paid out investment funds to Drifter Brewery Company following a campaign that raised R3.89 million, in excess of its original equity crowdfunding goal of R3 million.

The craft beer market in South Africa has grown over the last 10 years, with more than 50% of craft beer production taking place in the Western Cape. Beerhouse is earning a name for its extensive menu and the ’99 bottles of beer on the wall’, which founder Randolf Jorberg admits “might have something to do with the song”.

Jorberg owns the Beerhouse in Fourways and another in Long Street, Cape Town, and says the equity crowdfunding idea came about after a random customer expressed an interest in becoming a shareholder.

If the Tygervalley Beerhouse campaign is successful, its shareholders will have the advantage of liquidity since Uprise.Africa has entered into a partnership with ZAR X – a fintech-based licensed stock exchange that will list start-ups and small companies that have successfully raised capital for trading on the bourse.

Investment participation starts at R1 000 for a single share and is capped at R250 000 per investor. The campaign was launched in July and will run until September 14. It has a target of R3 million, and by Wednesday (August 7) had raised R729 000 from 56 investors for just over 37% ownership.

If unsuccessful in reaching its R3 million target, Uprise.Africa will return any funds invested by potential investors.

The crowd is growing

According to the World Bank, the overall market potential for crowdfunding in sub-Saharan Africa will be $2.5 billion by 2025. Traditional business funding models currently include bank loans, venture capital, private equity and government grants.

“We are simplifying venture capital through this mutually beneficial partnership for entrepreneurs and investors.

“It means when you have a business idea, you can leverage the Uprise.Africa platform to potentially raise capital quickly and can ultimately list on a licensed stock exchange, making your shares tradeable,” she says.

Uprise.Africa is currently the only equity crowdfunding platform in the country with a category one licence from the Financial Sector Conduct Authority (FSCA), which enables it to provide advisory services.

Equity crowdfunding set to get formal

Noma-Afrika Sandlana, manager in the investment providers supervision department at the FSCA, says the regulator has been reviewing the crowdfunding process and looking at the legislation other jurisdictions have put in place.

In the US, for example, companies are restricted to raising a maximum of $1 070 000 over a 12-month period and any shares purchased in a crowdfunding transaction cannot be resold for a year.

The FSCA has not introduced any such restrictions in South Africa as yet.

“It must be clarified that crowdfunding for a charitable cause – for example, for the garage station attendant recently – is not under our scrutiny,” she says.

“We are looking specifically at crowdfunding initiatives such as the one by Beerhouse currently, where potential investors are going to become shareholders and receive a return on their investment.”

“Second brewery Opens up to crowdfunding” title is not correct Beerhouse is not a brewer. Drifter which is mentioned in the article is a brewery.

These “craft breweries” are nothing else than regular breweries, charging exorbitant prices, around R90-R100/litre, when their cost is around R15-R20/litre. Darling “Craft Brewery” for instance is a massive brewery, producing thousands of litres per day, delivering all over the western cape.
In my opinion, a “Craft Brewery” should a small brewery, not further than a few kilometres from the pub or pubs it supplies and should be be limited to brewing 500 litres per day.

@oaktree – their production costs are much higher per litre compared to the likes of SAB (+-400%).

This space is getting crowded, and a couple of producers have scaled up and are flooding the market.

I don’t see how limiting the supply of a popular beer will do anything to assist with its pricing… unless I wasn’t paying attention in Ecos101… which is highly possible.

These kinds of ventures should qualify for that venture capital 100% tax deduction.

It is damned hard or virtually impossible to raise funding for a small business like this without daddy’s trust fund signing surety.

But, buyer beware! This sounds like a pub restaurant not brewery. Restaurants have a more than 70% failure rate. So best to invest if you live close enough and they offered a 20% shareholder discount and you drink a lot of beer.

Say 10 beers a week at 20% off the R50-each bill : R100 per week value is 10% dividend per week on your single share investment. Not even Bitcoin / PSG / Kubus gives those kinds of returns 😉

Crowd funding is not a new concept, as it has been around in many other forms for ages:

Recall the many calls or sms’s one has received during one’s lifetime about (dubious) winnings, but have to buy a certain amount of airtime for someone, pay an upfront ‘admin fee’ to claim, or ‘invest’ in a foolproof DIY stock-trading platform? Or won some weekend-away, and only need to attend a presentation to claim your prize?

YES, that is crowd funding *lol* The crowds are funding others’ lifestyle…

On a sober note: how will recipients of crowd-funded ventures generate individual investment reports? (i.e. how will the investor determine his/her individual profit? Can you sell you stake to others on an exchange?) Or is crowd-funding just bragging rights to tell your mates “I was part of XYZ successful business, let’s drink on it” (?)

When companies start promising 20% pa returns in their promotional video then the alarm bells ring.

Thats even if the thing works and doesnt collapse before then- I live opposite this location in the Northern suburbs- its basically a building on its own- removed from other eateries- with little foot traffic. There is a reason why Starlight didnt work in this spot. Some should learn from the mistakes of others.

I would rather go the RSA retail bonds/ Tyme Bank route (8-10%) for more guarenteed returns without the gamble. Sorry its not for me…