Investing 101: The need-to-know basics
The JSE’s five top-performing shares since 2005
Can Black Friday and Christmas save retailers in 2019?
CLICK THIS COMPANY MORE COMPANY NEWS SENS
MRPRICE 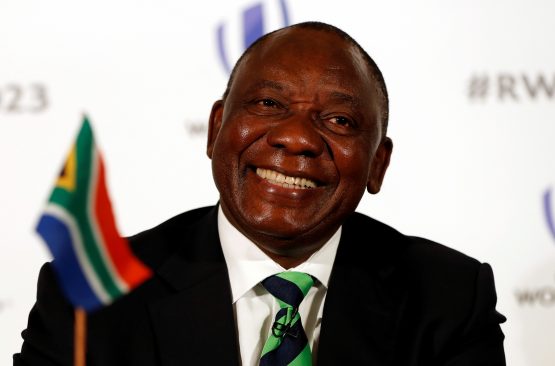 Shares in PPC, AdaptIT and the JSE have all gained since Cyril Ramaphosa's (pictured) election as ANC leader in December. Picture: Reuters/Paul Childs

There is no denying that there is a new sense of optimism around South Africa since Cyril Ramaphosa’s election as ANC president. Positive reports about local politics or the South African economy were very rare just two months ago, but they are now appearing around the world.

This sentiment has also been apparent on the JSE. Since December 13, the FTSE/JSE All Share Index has gained 7.41%, hitting a new all time high in the process.

What is notable is that the biggest gainers have not been the large multinational industrials that have dominated JSE returns for so long. In fact, AB InBev, British American Tobacco and Richemont are all amongst the market’s worst performers for this period due to the strengthening of the rand.

The positive story has rather been in the mid- and small-cap space. Since December 13, the FTSE/JSE Mid Cap Index has gained 12.04%. The FTSE/JSE Small Cap Index is 9.25% higher over the same period.

In both cases, this is more than double the return that these indices recorded for the whole of 2017.

These gains have also been widespread across a range of sectors. As the table below shows, companies ranging from information technology to retail to construction and financial services have all been lifted.

What these companies have in common is that they are geared towards a recovery in the South African economy. There has been a very clear and sharp change in investor sentiment towards these kinds of businesses.

A few names stand out:

The biggest gainer is AdaptIT, and this represents a major turnaround. The IT company’s share price fell more than 60% between the start of 2017 and the beginning of the ANC conference due to an extremely difficult trading environment.

In an interview following the release of the company’s results in August, CEO, Sbu Shabalala, told Moneyweb that the company was seeing “very low, if any, growth” in South Africa.

The change in sentiment has therefore had an immediate impact on its perceived prospects. If local companies start spending again, AdaptIT will be a business that is in line to benefit.

The upswing in Mr Price’s share price actually began before December 13 last year. The retailer rerated sharply from the end of October when it started to become apparent that its turnaround strategy was starting to deliver results.

It has however enjoyed further momentum from the growing optimism around the local economy. The outlook for consumer spending will continue to improve if the rand stays strong, inflation is depressed and confidence returns.

Mr Price is now trading at a new all time high, having passed the levels it reached in April 2015.

It has however now more than doubled off those levels to trade at R8.45.

This uptick also began prior to December, but confidence returning to the South African economy will definitely benefit companies like PPC. More positive sentiment means higher levels of investment and capital spending, and more demand for cement and related products.

The JSE’s share price had enjoyed a very strong run up to the middle of 2016, where it peaked at around R183 a share. However, it subsequently slipped as low as R123 and was at R141 per share just before the ANC conference.

Since then it has gained for six straight weeks, closing at a new high of R187.80 on January 26.

A reinvigoration of foreign interest in JSE-listed shares and bonds is good for activity on the exchange, and therefore positive for the JSE’s earnings. If this continues, shareholders will stand to benefit.

Journalism at its best – how to create hubris

These are facts Sir not made up.We need to start being positive.

What tosh: there are a lot of people, including the 60% who will now vote ANC at the next election, as well as DA supporters who would be happy for the DA to stay put (and do a better job) as the official opposition, who are perfectly happy with the outcome.

Yeah. Fails to mention that these shares started moving before 13th Decemeber.

and next we will also read of a 6% growth for 2018,…all just Smoke and Cyrrols. ANC have already proved itself to what it is.

Liberia’s newly sworn-in President George Weah pledged to cut his own salary by a quarter, why? as he said it…“Our economy is broken; our government is broke. Our currency is in free fall; inflation is rising,Unemployment is at an unprecedented high and our foreign reserves are at an all-time low”. a lesson for SA leaders

Are we ignoring the obvious shares that we should all be loving…ARM and ARC…….we all take care of our family first, why should Cyril be any exception! I’m buying! Roy Cokayne / 24 Jan 2020
Slim order books need to fatten and non-payment by government must stop, or more companies will be forced to close their doors.
7