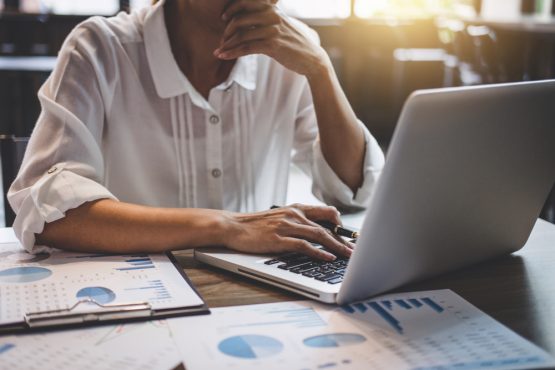 Women managers remain woefully under-represented in the fund industry, but they’re doing a better job picking stocks than their male counterparts, at least this year.

Among some 500 large-cap U.S. mutual funds, those with at least one-third of manager positions held by women have beaten those with no women by 1 percentage point in 2020, data compiled by Goldman Sachs Group Inc. show. That’s a slight departure from the previous three years, when the gender difference had little impact on fund performance. Woman-managed funds are benefiting from a preference for technology stocks, an industry that has dominated gains. Male managers lean toward financial shares, the second-worst performer in the S&P 500. Also helping widen the gap is Tesla Inc., which is more widely owned by female managers. Shares of the electric automaker have soared by more than 400% this year, compared with a gain of less than 10% in the S&P 500.

“Even after adjusting for risk, female-managed funds have outperformed their counterparts amid the pandemic-related market swings,” Goldman strategists led by David Kostin wrote in a note to clients. The tech sector “is the largest source of disagreement between female-managed and all other large-cap mutual funds,” they wrote.

Women are still a small minority in the industry. Only 3% of the mutual funds tracked by Goldman have an all-female fund manager team, collectively managing just 2% of total assets. In contrast, 77% are managed by an all-male team, with these funds accounting for 57% of assets.

1. Who cares
2. What does it matter
3. Why is there an article saying just about nothing

The US/west is in a middle of culture war. Expect more inane articles like this, whose only purpose is to humiliate or demonise SWM (straight white males).

What faulty (how can you measure the performance based solely on something as arbitrary and broad as gender, what were the control group in the study, are the funds operating with the same objectives, strategy, risk tolerance?, how did they control for experience, education etc, etc) studies like this do, is just to serve as a basis and a reason to install quotas and further the aims of the cultural revolution.

Agreed, what a lot of rubbish, sample group of 500 and maybe differences of 1%, just wait Elon Musk will say or do something soon to influence the share price and boom the whole picture will change.

Also agree with culture war comments. A friend working in the UK has to go through humiliating time wasting widespread “diversity training”, do we not have more important things to get done.

The vast majority of the financial industry is captured by males.

Here we another disillusioned comment with no capable data comparison.

There will always be differences in various sectors no matter how much social engineering and incentive is input.

Instead of pushing a hard left or hard right why not give everyone the same opportunity and incentive than accept “Unity in Diversity” as the way forward.

And if you are still Hell bend on believing this disillusionment then consider all the men who are in jail, of all the jail spaces 90% are occupied by males, where is the equality then, the millions of men who died in war, the countless number of mean who seem to die an average of 15 year before their wives do ? This should surely reduce to 50% if we enforce equality.

You cannot have 1 without the other, that is engineered discrimination at best which is contratory to what is being asked in terms of equality.

The same goes for BEE and all the other sonically engineered discrimination the is enforced by law.

The only thing that will ever ensure that things are more equal in societies is a high standard of Knowledge and Education with equal opportunities and the acknowledgement of society that we are different and it is ok.

Sorry, this comment is far too sensible and should therefore be removed.

You are oblivious to gender equity facts and truth in its totality.

Male nurses are woefully under-represented in the health industry and nobody make a scene about that. People choose their careers. Get over it.

Within the next decade the world will be singing a new slogan “#womenstopmaleabuse”….

I am a married man. Women are better at everything, even driving, and they are always right, even if they crash your car. I tried to confront this unfair situation when I was younger, but as I grew older and wiser, I realised that it is not worth it. So, just accept it and agree. Women are better, and they are never wrong, and you will live a happy life.

The women’s suffrage concept has automatically led to the affirmative action concept with women appointed into managerial positions being considered as “another affirmative action appointment”. Ability lays in the general public and not in women or men.

One probably needs better data to assert whether women are better : to correct for many potential factors.

I cannot imagine that there is rational reason for either male or female fun damagers being less worse than the other.

There is a third choice – run your own funds, whether you are male or female the effect of compound fees will always give you an advantage over a guy or a girl when they carry that handbrake of fees, especially as more than half of men and women cannot even meet, never mind beat the total market.

Yes, males have been over-represented in finance globally just like African-Americans dominate the NBA and women are over-represented in HR. The main question is what is stopping women from entering and having careers in finance and asset management. Happy to entertain one, just one, rational argument? There are many, many fields of endeavor that do not have precise racial and gender representation and in most cases there are logical reasons.

Love the unhappy male prejudice in full flight in the comments here! Lol!

The fact is that some previous studies have found that groups of women stock-picking hobbyists have outperformed their male counterparts.

This seems to have been due to the women making sound choices, and then STICKING to the plan!

The men it seemed, were too much into aggressively chopping and changing too frequently.

I go with results. From wherever, and whoever, they come.

Forget foreign, we have our own trailblazers – Gail Daniel (Investec), Fatsima Vawda (27/4), Delphine Govender (Perpetua). Give them some more time and they will give ol Warren Buffet a run for his money.

ummmmm…not too sure about 2 out of 3 mentioned, that is based purely on fund performance…also, poor staff retention.

The reproductive organs of my fund manager are relevant? How inane. Why not pancreas or kidneys? I’m more of a brain man myself actually