Why you should be worried about the JSE

From the start of the year to the end of July the FTSE/JSE All Share Index (Alsi) was down 1.9%. While this marginally negative performance may be frustrating for investors, it isn’t necessarily eye-catching.

However, if one looks a bit deeper, the state of the market becomes more concerning. A market breadth study conducted by Methodical Investment Management to the end of July shows that only 33% of the 160 stocks in the Alsi are up so far this year.

In other words, the market is being supported by only a few stocks, and according to Methodical’s chief investment officer, Steven van Jaarsveld, this number is growing smaller.

“The whole market is pulling down, but from an index level people don’t realise it,” he says. “The man on the street might think that this market is not in such a bad place, but looking at the breadth of the market, there is something brewing.” As a momentum investor, Methodical is particularly interested in this trend because directionality is important and it is becoming more and more difficult to find any positive momentum on the JSE.

So far this year the JSE has relied on a handful of resource counters, led by BHP Billiton and Anglo American, and Naspers for support. A few bank shares and local retailers have been up, but there is little else in the positive column.

Of the 53 counters that were up at the end of July, 19 are also outside of the top 100 by market capitalisation. Effectively they are too small to have a meaningful impact.

“The overall market is looking more and more fragile,” says Methodical’s Andrew Cormack. “We’re not calling the market, but a decreasing proportion of stocks is actually performing well.”

What’s also worth noting is that of the counters that are down this year, the majority are down more than 10%. More than a fifth of the stocks on the JSE have retreated more than 20%. The decline in these counters is therefore pronounced.

This analysis is also worth considering in the context of the fact that next month will mark 10 years since the collapse of Lehman Brothers, which triggered the 2008 market crash. While the JSE is not showing quite the lack of market breadth it did a decade ago, it is approaching something similar. 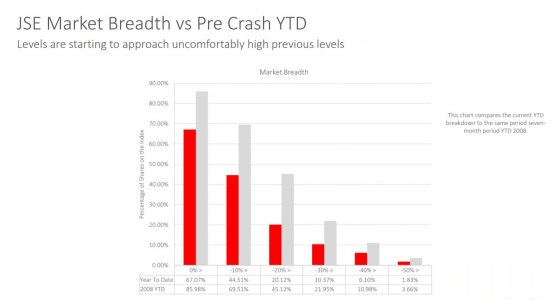 “The reason we wanted to look at this market relative to 2008 is because we felt that there was a similar environment before that crash,” says Van Jaarsveld. “Then there were just seven stocks keeping up the whole market.”

What investors should be aware of in this kind of situation is that, since most of the market is already retreating, it doesn’t take much to tip it over the edge.

“What happened in 2008 was that the smaller stocks were already in a bear market for a year prior to the crash,” says Van Jaarsveld. “It feels like we are now in a similar position where the market is getting weaker and weaker, but the index level doesn’t reflect it. So when something happens, especially in global markets, our market could sell off very rapidly. We only need two or three stocks to move downwards.”

Offering some consolation is the fact that the global markets are not quite in the same position as the JSE. On the S&P 500 just over 60% of stocks are up so far this year, while on the STOXX Europe 600 it is just under 50%.

“There is still breadth in international markets, but the number of stocks that are retreating has been creeping up,” says Van Jaarsveld. “It is happening more slowly in the US and Europe, but we are seeing it there.”

This doesn’t mean that a 2008-like event is imminent or even likely, but some mean reversion should be expected. There is, therefore, good reason for investors to be cautious.

“Once we really start losing market breadth on the JSE, we are going to realise very quickly that we haven’t had breadth for a while,” says Van Jaarsveld. “That’s when the large moves incur and volatility increases quite a lot.”

“The man on the street might think that this market is not in such a bad place” . What planet are these guys living on? Take a drive through old industrial parks such as Silverton , Rosslyn , Kempton ,… that is what the guy on the street sees. Workshops having a hard time staying open , outsourced work, unemployment… Where does all this speculative value/hope come from, it’s not like it all went south over night?

I agree. The man in the street knows much more than what our learned analysts know: less and less employment opportunities, decreasing levels of confidence in the economy, little incentive for new investments in manufacturing factories. Maybe analysts should leave their cosy offices and take drives in the industrial areas, in addition those people indicated, in Alrode, Industria, Wadeville. Mind you, this is only in Johannesburg area. One shudders to think what the picture looks like in other places around the country

On every road trip through many small towns in the country which my wife and I did over the past 5 years, the economic and social decay is clear shocking and wide spread.

This is the real issue. On the ground the sa economy is dying . Global growth is good and we are nowhere. Poor policy education corruption and crime is killing small businesses and employee creators. Plus in a tech savvy world to be the planets dumbest at maths does not help.help . JSE ..The actual SA earnings components evidences this clearly. As for the ANC….hopeless…no idea….still a 1960s liberation organisation not a government. ..simply too incapable

As stated before: We are facing the final episode of the full de-industrialisation of SA. There is a 50/50 risk that Eskom is going to turn off the power to the Vaal Triangle, where the last remaining heavy industries are hanging on by their finger tips.
The four sectors of the economy in which unschooled labour was traditionally employed are almost gone, thanks to government and its “enforcers”:
Agriculture;
Mining;
Construction;
Heavy Industry.
Soon, everybody of the “correct” hue and political persuasion will have office jobs in government and the SOE’s. The rest of us? Not so much. SA will produce sweet fa and in due course follow in the footsteps of Zimbabwe. Hope you have externalised your investments, because now is too late…

Share prices look forward. They are really telling us what we already know, there is little prospect for increased earnings in ZA. There are commentators who have noted that the small- and mid-cap sectors on the JSE are the cheapest in the world. This should be treated with caution.

When they’re so cheap, one has to ask why so. There is bound to be a good reason. Otherwise buyers would be there.

Of course everyone understands that the JSE are only reflecting the stagnation and decline of the real economy, but the main subliminal point of this article is that index tracking funds (Alsi, Top 40, Dividends, Sapy, etc) are particularly at risk if the 34 stocks (53 – 19) that currently keeps the JSE hanging in, tip over to negative territory. The correction could be 20% plus to the level of the balance of JSE stocks.

So if the JSE is becoming less SA-focused and more offshore as per our analysts, then the JSE shows very little compared to local. The real local situation is very poor, and those SA counters that are pure South African have already hit the wall long ago.

Let’s decouple the thinking a little, the JSE does not correlate to SA GDP and hasn’t for a long time.

It’s taken a while to wear down the resilient SA manufactures and retailers but now the chicken are coming home to roost.

Things will get worse before they get better. we are a very resilient nation and far more hardened than others. The majority of the population have no choice but to “Vas byte” they have very few other options available. It is human nature to expect the absolute worst but the sun still rises in the morning(in South Africa at least). There is still a core of very ethical and moral people who will stay anchored in South Africa come hell or high water and this is where our hope lies. Buy far people are the greatest investment of a country, so we are gifted with great wealth. There will always be people who come and go but we have a nucleus to survive and the eventful past history has been testament to this! Viva South Africa……Viva!!!!!

i don’t want to survive, i want to grow, improve. all of the best !

On the financial side it is shocking the number of SME’s are not being paid by large business and are struggling to stay afloat, some already crashed. Added to this the consumer is being sucked dry by national govt and local governments to pay for all the corruption and looting. We in for some very tuff times yet leading to more violent unrest and political instability.