As traders assessed the risk of geopolitical tension in Ukraine and the persistent pressure of soaring energy costs on global supplies.
By Bloomberg News 17 Feb 2022  07:25 Aluminium climbed toward a 13-year high reached earlier this month as traders assessed the risk of geopolitical tension in Ukraine and the persistent pressure of soaring energy costs on global supplies.

High-level diplomacy continues in a bid to defuse the situation around Ukraine after western officials voiced reservations about Russian announcements that some of its forces are being drawn down. The Kremlin has consistently denied it plans an attack.

Aluminium has led gains in base metals this year with an advance of 16%, as rising fuel costs and environmental curbs snarl supply in Europe and China. Stockpiles held by the London Metal Exchange shrank again on Wednesday, alongside most other metals. 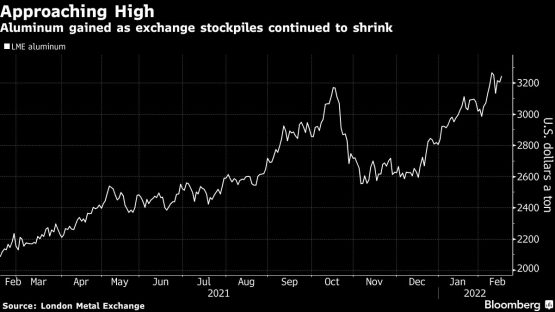 In China, the biggest producer and consumer of aluminium, prices are supported by tight supply because of pandemic-driven lockdowns and constraints during the Beijing Winter Olympics, Jinrui Futures Co. wrote in a note.

Separately, China’s inflation slowed in January, giving the central bank more room to ease before a key political leadership meeting later this year. The outlook for a further relaxation of monetary policy is supportive for metals.

Copper inventories rose from the lowest since 2005, signaling some relief for the tight market.