Anglo’s seen the future of mining, and it looks a lot like farming Venetia Diamond Mine in Limpopo is going underground, as will many others – no more convoys of trucks, surface conveyor belts or mechanical shovels scarring the countryside; only material of value will be brought to the surface. Image: Supplied

We previously looked at the history of Anglo American, but what of its future?

Addressing analysts in London recently, Anglo technical director Tony O’Neill outlined a vision of the future where mines will be similar to farms.

Virtually all mining activity, including the extraction of minerals, leaching and processing will take place below ground. Rock cutting will be done without vibration and only material of value will be brought to the surface. No more convoys of trucks or surface conveyor belts delivering material to the processing plant, no more mechanical shovels scarring the countryside.

On the surface, you may see green fields, cows, and perhaps a wind turbine or two and some solar panels. Surplus power generated by the mines will be supplied to local communities. Exploration will be done by satellite and minimal use made of water. Perhaps even no water at all. The era of dynamite and dust is coming to an end. Mining, under pressure from environmental lobbies and regulators, has to clean up its act and still make a profit.

To do that, virtually every aspect of mining must be reimagined, and Anglo intends to win this race.

Much of this may sound a bit too fanciful, and many of the analysts listening to O’Neill would rather wait and see if Anglo can deliver on its trademarked vision of FutureSmart Mining, which is expected to yield a US$3-4 billion uplift in earnings by 2022, with US$1 billion of this coming from technology and innovation.

“In many ways you could argue that mining can become like farming, where people accept it as a perfectly acceptable activity to coexist beside. The normal nuisances like dust, noise, visual impacts are really no more of an issue,” said O’Neill.

The mine of the future is to be CEO Mark Cutifani’s legacy. Since 2012 Anglo’s story has been one of remodelling the business for growth and sustainability, with technology and innovation as enablers. One of Cutifani’s first appointments was O’Neill as technical director.

The mine of the future: safe and pristine

Mining has always had to wrestle with unknowns such as the price of commodities, uncertain electricity supply and rancorous labour issues. There is no question that the mine of the future envisages a different kind of worker altogether: highly skilled, well paid, and operating in a safe and pristine environment. Far fewer workers will be required in this mining Valhalla. Even the leaching of orebodies will be done underground, surrounded by an impervious curtain to prevent chemical contamination of the surrounding rock. Drone operators performing mapping and survey of all the mine pits at Anglo’s Kumba Iron Ore Kolomela Mine. Picture: Anglo American/Flickr

Mining has had to reinvent itself repeatedly through the decades. Consider that in 1900 it was possible to extract 40kg of copper from just two tonnes of rock. Today, as a result of declining grades, it takes 16 times this amount of rock to produce the same amount of copper. Likewise, the amount of energy required has risen 16 times, and water consumption per unit of copper has doubled. This needs an entirely different approach to mining.

The first step in this journey addresses operational performance: eliminating mistakes, taking variability out of the equation and setting performance benchmarks that are punishingly high. Anglo’s not there yet. In some of its coal mines the performance of its mechanical shovels is near world-class benchmarks, but in other areas it needs to treble the output to get there. But it is already seeing a 20-30% improvement in output through better operational performance.

Coarse particle flotation is one of the technologies that has already yielded substantial gains in Anglo’s copper operations. This is where particles are crushed to a size three times bigger than conventional crushing, resulting in a 20% increase in throughput and 35% water recovery, using 20% less energy.

In platinum, 10-15% of the valuable metal is lost because the ore is ground too fine. Anglo is testing two ultra-fine recovery methods to improve recoveries by 4%.

Bulk sorting is a way of getting rid of waste rock before it enters the processing plant, thereby increasing ore grades. When implemented at the El Soldado copper mine in Chile, Anglo was expecting a 5-7% increase in average grades but was surprised when it managed to achieve a 20% improvement. A view of Anglo’s El Soldado mine operations in Chile. Picture: Anglo American/Flickr

Traditional leaching is a low energy method of minerals recovery, but typically yields recoveries of just 40-65%. New chemistries are able to target specific minerals and improve recoveries to 80-90%, which means previously marginal ore bodies suddenly become interesting. This could also reduce or eliminate the need for hugely expensive smelting processes in the future. As a further benefit, old tailing dams could be reprocessed to recover minerals left behind.

Hydrogen fuel cell-powered trucks are another ground-breaking technology that is about 12 months away from implementation. New rock cutters, some of them already in use in the platinum mines, will soon speed up underground mine development by three to four times current speeds, while removing workers from potentially dangerous working areas.

These are just some of the enhancements O’Neill expects will generate an extra US$3-4 billion in earnings by 2022.

While some analysts are sceptical, Deutsche Bank is not.

In a recent report it argues that Anglo’s implied returns are conservative despite a three-year tear in improved margins and returns.

“From the UK majors, we believe Anglo has the best and clearest growth strategy – [an estimated] 30% uplift in structural Ebitda [earnings before interest, taxes, depreciation, and amortisation] by 2022/23 – led by the company’s pipeline of copper growth projects [around half of Anglo’s growth out to 2023] and supplemented by a number of low risk, brownfield expansions in diamonds, coking coal and iron ore.”

Divestments of South African assets are a possibility over the medium term, particularly of the thermal coal assets, says Deutsche Bank. This will reduce SA’s contribution to group earnings to 20-25% by 2023, roughly half of what it was in 2013.

This doesn’t mean Anglo is saying goodbye to SA.

Its US$2 billion investment in the Venetia diamond underground project in Limpopo got underway in 2013. This is the largest single investment in diamond mining in South Africa in the last two decades. This will extend Venetia’s life to 2046 by moving it to an underground operation and will commence production in 2022. Over the course of its life, the underground mine will treat about 132 million tonnes of material containing an estimated 100 million carats.

Anglo might have exited gold and domestic coal supplying Eskom, but its portfolio today is tuned for stability and growth. Some 20% of its earnings is from copper, but this will grow to nearly a third by 2023. Another 50% comes from iron ore and coal, and that figure will remain more or less the same over the next five years. 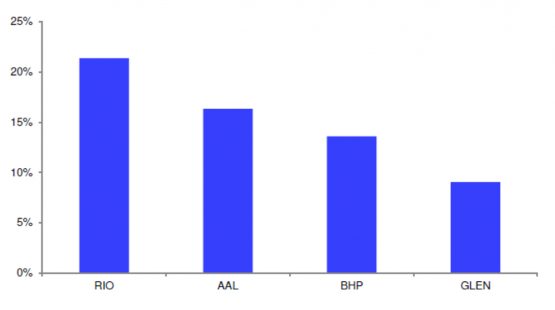 Do praytell Anglo how mining, leaching, extraction and processing can shift underground when most of the world’s mines are surface operations?

And if so, how can you expect EBITDA increases whilst funding these expensive underground ops in volatile countries?

Only similarity between the two I see in SA presently is both will soon be expropriated without compensation.

Another great PR story for Anglo. I remember the good old days of a share price at R550 when the Rand was reasonably stable and before the Oppenheimers sold out! We still seem a long way off that and with higher costs but I congratulate Anglo on a lovely vision. I just wish it was possible in Africa.

The Dream Meme is gaining momentum. Would like to see ball and rod mills underground – with no vibration.

Mining robots and agricultural robots are in everyone’s future. Soon a miner will wear a suit and tie and run their mining bot from a desk…..