Kabuswe says the decision to shut KCM was flawed and the government should have rather withdrawn Vedanta’s mining licenses if it was found to have broken any rules.
By Matthew Hill and Taonga Clifford Mitimingi, Bloomberg 27 May 2022  07:39 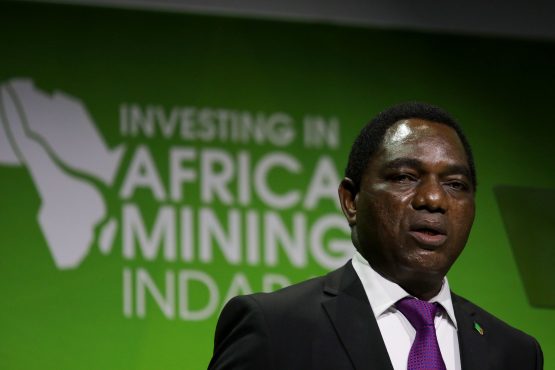 Zambia’s new business-friendly president faces a dilemma: risk a political backlash by returning mining shafts seized from an Indian company his mines minister once labeled as the nation’s worst-ever investor, or prolong a three-year legal dispute over one of its most important assets.

Hakainde Hichilema, who won power in August, has yet to say what he’ll do to revive Konkola Copper Mines Plc — key to realizing his ambition of more than doubling national output of the metal within five years and rebooting the debt-stricken economy.

Predecessor Edgar Lungu stripped majority shareholder Vedanta Resources Ltd. of the operation after a dispute over taxes and its expansion plans. Vedanta, owned by Indian billionaire Anil Agarwal, has been fighting the decision ever since, largely paralyzing one of Africa’s biggest integrated copper producers, which employs almost 13 000 workers.

Hichilema told reporters at a mining conference in Cape Town this month that agreement had been reached to end litigation, a detente Vedanta confirmed, prompting speculation the company will return. A public backlash ensued and the government swiftly denied a decision had been taken. It then emerged that Vedanta had filed a new lawsuit in the Lusaka High Court challenging the state’s appointment of a new provisional liquidator on May 11 — the same day the firm said it had agreed to terminate all legal action.

By the time Zambia seized Vedanta’s local assets, its reputation had been damaged because it failed to pay suppliers and contractors and working conditions at KCM were “so bad,” Mines Minister Paul Kabuswe said in an interview. “If ever they were to come back, these are the issues that need to be looked at.”

The company is adamant it wants to return. It will pay KCM suppliers as much as $220 million due at the time the provisional liquidator was appointed, and give workers 20% wage increases and cash bonuses, the company said in a May 5 letter to Kabuswe. It also undertook to spend $1 billion to complete an expansion project that started in 2008.

“Vedanta is ready to serve the community and workforce in a responsible manner through a structured program and through an independent trust to empower Zambians in the areas it operates in,” Chief Executive Officer Sunil Duggal said in an emailed response to questions.

The company has faced other controversies.

Last year, it reached a settlement with 600 Zambian children who filed a claim against it in a UK court for polluting a river. And in 2018, the government in India’s southern Tamil Nadu state closed a copper smelter the firm owns after more than a dozen people died when police opened fire on villagers protesting against pollution from the plant. The company denied wrongdoing and is still fighting the decision in court.

Its relationship with the Zambian government deteriorated after a 2014 video recording surfaced in which Agarwal boasted about KCM making as much as $1 billion a year for Vedanta — at the time KCM was declaring losses. The remarks sparked an outcry in the media and the decision to liquidate KCM — which conflicted with a 2004 accord stating that any disputes should be resolved through arbitration — won widespread public support.

Duggal said the 2014 video of Agarwal addressing businesspeople in Bangalore, India, was posted by an activist who took “a small part of the video footage of the chairman’s speech, and he used it negatively out of context.” Agarwal said at the time that the company had taken very little out of KCM. “The situation remains that people are very negative about Vedanta,” Bizek Phiri, a history professor at the University of Zambia in Lusaka, the capital, said by phone. “People are saying: How can we trust this company? This time around, why should they do things differently?”

Kabuswe says the decision to shut KCM was flawed and the government should have rather withdrawn Vedanta’s mining licenses if it was found to have broken any rules. The previous liquidator stepped down in March after prosecutors accused him of theft and money laundering.

Kabuswe’s Chililabombwe constituency — home to Konkola’s biggest mines — was one of the key areas in Zambia’s Copperbelt region that helped Hichilema beat Lungu by a landslide. It had previously been a political stronghold of Lungu’s party, and was also the parliamentary seat of his mines minister.

The legal wrangling and several failed attempts at arbitration have starved KCM of capital, while deterring other potential investors at a time when prices are surging for the metal that’s a key ingredient in renewable energy equipment like wind turbines and Tesla Inc.’s electric cars. In 2019, KCM produced more than 177,000 tons of finished copper. The metal accounts for more than 75% of Zambia’s export earnings.

The eventual outcome of the dispute will give an indication of how committed the government is to maintaining policy stability and protecting property rights. Developments are being closely watched by businesses and Zambia’s trading partners alike.

Further complicating matters is that KCM agreed to borrow $100 million from Trafigura Beheer BV in July last year to continue operating. The debt was supposed to be repaid in future copper production. ZCCM Investments Holdings Plc, the state investment company that owns 20.6% of KCM, put up 750 000 of the 3 million shares it holds in Kansanshi Mining Plc as a guarantee for the loan, according to the agreement seen by Bloomberg. Kansanshi, one of Zambia’s biggest copper mines, is majority owned by First Quantum Minerals Ltd.

“An audit will be done of the asset, including a legal assessment of the agreements entered into by the provisional liquidator during his tenure at KCM,” Duggal said.

The government is intent on protecting investor rights and ensuring mines are responsibly and transparently managed without political interference, and doesn’t want to get “bogged down” in a conversation around ownership, according to Anthony Bwalya, Hichilema’s spokesman.

“If you are a miner on the Copperbelt, what you want is a job that is guaranteed and is assured,” Bwalya said by phone. “The only thing that we are concerned about is that whatever decision we make, is that that decision must deliver jobs for the miners,” improve their income, benefit local communities and add to the tax base, he said by phone.

Augustine Mubanga, whose company supplies cables and other mining equipment to KCM, said Vedanta may be best placed to revive KCM because it knows the assets and the investments needed. If the government were to allow Vedanta back in, it should demand that it first transfer as much as $1.8 billion to accounts in Zambia to pay for KCM’s expansion and settle its arrears with suppliers, he said.

“Talk is cheap,” Mubanga said by phone. “We need an investor that is ready to bring the asset back to full operation.”

Even so, restoring Vedanta’s control could come at great political cost to Hichilema, said Grieve Chelwa, director of research at The New School’s Institute on Race, Power & Political Economy.

“Vedanta was completely despised on the Copperbelt,” he said by phone. “And for good reason.”