The rally in copper prices in November was underpinned by signs of a rebound in Chinese demand.
23 December 2016 08:14 At a time when banks from Goldman Sachs Group Inc. to Societe Generale SA are predicting that the global copper market is about to tighten, a 62 percent surge in stocks on the London Metal Exchange is a reminder of the oversupply the industry has faced in recent years.

The six-day streak of deliveries, which ended on Monday with the largest one-day inflow since at least 1994, has weighed on prices and given succor to less optimistic forecasters who say that a rally that began in November isn’t supported by fundamentals.

“Copper inflows into the LME between December 12th and 19th have certainly dented some of the early December copper optimism,” said David Wilson, director of metals research and strategy at Citigroup Inc. in London.

The rally in copper prices in November was underpinned by signs of a rebound in Chinese demand and bets that U.S. infrastructure spending and economic output will increase when Donald Trump takes office. The surprise election result also prompted investors to buy up hard assets as a hedge against inflation and continued dollar strength.

That momentum was lost as LME stockpiles jumped, bringing prices to one-month lows this week. Copper fell 1.6 percent to $5,419.50 a ton on Thursday, the lowest since November 18, and is down 9.2% from this month’s high on December 5.

But a closer look at LME inventories reveals a complicated set of supply and demand conditions. Throughout the year, an unprecedented volume of copper has been delivered on to the exchange, but it has been canceled almost as quickly as it has arrived. The result is a ‘noisy’ snapshot of the global copper market, London-based Societe Generale analyst Robin Bhar said by phone.

To make sense of what’s been happening, it helps to look at the market for copper concentrates, the semi-processed ore used to make the refined cathode that’s been piling up on the LME.

Following a surge in mine supply, copper concentrate imports into China have risen sharply as smelters there have taken advantage of an increase in the fees they charge to turn concentrates into metal.

But as they’ve boosted production, the glut in concentrates has slowly fed through into the refined market, putting pressure on local premiums for copper cathode and causing imports of finished metal to slow. China may be the world’s largest consumer of copper, but at certain points this year some smelters have found it more profitable to sell cathode to traders in the international market rather than domestic customers.

By taking advantage of cheap freight, storage incentives, low financing costs and a contango in the forward price curve on the LME — a market structure where prices are cheaper today than they are in the future — traders can break even or turn a small profit by storing the metal in private warehouses while they wait for demand conditions to improve.

That hasn’t been the only trade in town this year, however. Other merchants have also been buying up exchange stocks to deliver to contractual customers in China. In doing so, they have complicated the efforts of rival traders trying to profit from storing metal, as buying stock from the LME has caused the forward price curve to flip from contango to backwardation frequently this year.

In the process, the profitability of storing metal has periodically broken down. As the losses have become too large to bear, traders holding stock in private warehouses have chosen to deliver it on to the LME to eliminate their exposure. In this way, the competing ambitions of rival trading houses have created a carousel-like churn in LME copper stocks.

What the deliveries show is that the market is still dealing with the “wall of supply” that arrived in recent years, but anyone taking a bearish view on copper after seeing stocks rise would be getting the market “seriously wrong,” Bhar said on Tuesday.

In the concentrates markets, there is evidence that the oversupply that has caused stocks to swell may be coming to an end. Treatment and refining charges have fallen under benchmark contracts for next year and are also sliding rapidly in the spot market, threatening the fragile economics that have contributed to the dramatic movements in copper stocks this year.

“Traders will always play these types of games,” Bhar said. “The job of analysts is to try to look through the muddied waters and discern an overall trend. For me, the trend is still positive.” 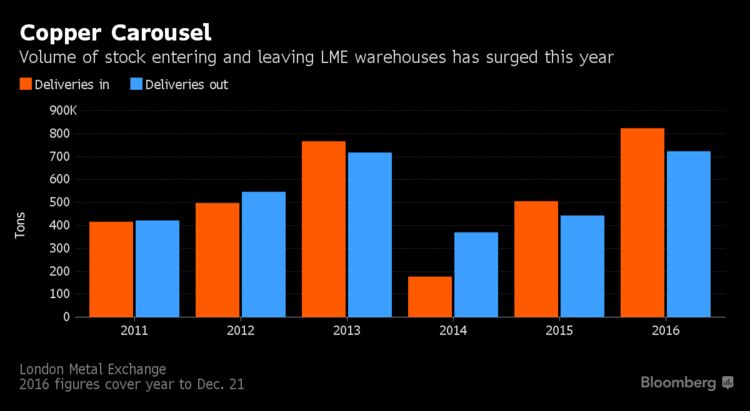 © 2016 Bloomberg L.P
Get access to Moneyweb's financial intelligence and support quality journalism for only
R63/month or R630/year.
Sign up here, cancel at any time.