Judge overturns his suspension of the previous Nuclear Energy Corporation board.
By Ciaran Ryan 19 Aug 2019  00:17 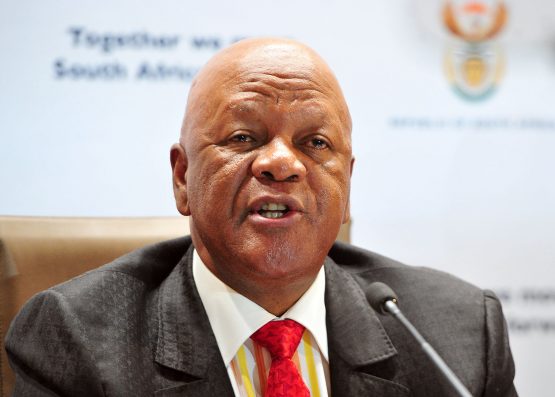 A ‘rogue minister’ who went on ‘a campaign of destruction’ is how trade union Nehawu describes Radebe (pictured during a media briefing in March). Image: Supplied

It means Dr Kelvin Kemm is to be reinstated as chairman, and Pamela Bosman as head of audit and risk. Legal experts say the effect of Friday’s judgment is that the current Necsa board is dissolved. This flows from other court judgments, notably the 2017 judgment in Popo Molefe against the Minister of Transport, where the court found the minister had unlawfully removed the former board of the Passenger Rail Agency of SA (Prasa). The subsequent appointment of a new board is therefore also illegal and its decisions are subject to review.

The status of former Necsa CEO Phumzile Tshelane is less certain, as the court found that the minister was within his rights to suspend Tshelane pending a disciplinary hearing, which is still ongoing. However, lawyers for the suspended board members say all decisions taken by the board since December last year are unlawful and must be reviewed. That being the case, Tshelane must also resume his position as CEO.

The grounds for suspending Tshelane were substantially similar to those used to dismiss the board, which makes his suspension equally suspect, Tshelane told Moneyweb. “The effect of this damning judgment is that Necsa currently has no board in place. Further implications are that the decisions that the unlawfully appointed board makes and has made stand to be reviewed and set aside.

“This judgment makes it clear the former minister was drunk on his power and went on a frolic of his own, with plans to unlawfully change a sitting board before he had properly engaged with it.”

Nehawu (the National Education, Health and Allied Workers’ Union) and the suspended board members say the minister’s “destructive” intervention at Necsa had cost it at least R500 million in lost revenue, which it is now attempting to recover from the state.

The judge found numerous irregularities related to all three suspensions, not least of which was the fact that none of the suspended board members was given a proper opportunity to reply to Radebe’s accusations of “defiance and ineptitude”.

In the case of Kemm and Bosman: “I find the minister did not consider their written representations before making a decision to remove them as directors of Necsa,” wrote Judge AJ Mtati.

Within an hour of receiving over 2 000 pages worth of documents requested from the suspended board members, Radebe had sent out termination letters to Kemm and Bosman. “Once again, in these letters [of termination], the minister does not deal with each response raised by the applicants [Kemm and Bosman] but comes to a generic all-encompassing response emphasising his dissatisfaction about the performance of Kemm and Bosman,” wrote Mtati.

The court adds that a careful reading of the minister’s correspondence shows that he had already made up his mind to axe the board as early as November last year.

While the minister had every right to be frustrated over the shutdown of the medical production line at subsidiary NTP, he did not follow the legal processes.

Radebe had specifically accused the suspended board members of unauthorised foreign travel by senior scientists and managers, dissemination of false information to the media, unauthorised increases in remuneration, the months-long shutdown of the NTP medical isotope production facility, and the “unlawful” signing of a memorandum of understanding with Russian nuclear healthcare company Rusatom.

The Companies Act requires the state, as shareholder of Necsa, to raise issues of concern with directors. Radebe called a meeting in Cape Town on November 28 last year, which went on for just 20 minutes. “This meeting cannot be viewed as an intention to comply with provisions of section 71 of the Companies Act,” reads the judgment. There was no proper notice given to the directors and no agenda was provided ahead of the meeting.

Radebe instructed Kemm to bring the entire board to Cape Town, at a cost of R60 000, for a 20-minute meeting.

Zolani Masoleng, Nehawu branch chairperson at Necsa, welcomed the court finding as the first step in bringing stability back to the company.

“This judgment vindicates our long-held position as the union that [former minister] Jeff Radebe has been nothing but a disaster to the nuclear industry in general and Necsa in particular. His intervention at Necsa was not in the interests of the organisation and SA at large but appears more to advance his own agenda and those of a clique-pursuing self-interest,” says Masoleng.

“He interfered with corporate governance when he among others undermined the Necsa board and directed that its subsidiary NTP report to him directly. It is also therefore no coincidence that the board he appointed in December 2018 embarked on a misguided path to retrench 400 employees, planned to sell some parts of Necsa and were reversing the transformation gains achieved through the years.

“In light of this judgment and our submission to the ministry, we are making a call to the Minister of Mineral Resources and Energy to sack the current Necsa board and institute a full-blown investigation on the intellectual property of Necsa that has found its way into private hands without any benefit to Necsa, and whether there are no deliberate acts of sabotage taking place in the organisation.

“We further call on the minister to interrogate the role played by his officials at [the Department of Mineral Resources and Energy] in engineering this unlawful conduct.”

Masoleng says the company has been reduced to a financial wreck as a result of Radebe’s actions.

“Had Radebe left the company alone, it would not be in this position. What consequences are there for rogue ministers who go around on a campaign of destruction like this?”

Prior to Radebe’s intervention, Necsa was a profitable company, winning awards and accolades from the Auditor-General for its clean audits (under Pamela Bosman) and from the Institute of Directors for its good governance.

Two years ago Necsa made a profit of about R300 million and paid tax of R80 million to the state.

In the last six months, the company has burned through no fewer than six acting CEOs and two chairmen. Its radiochemical plant has been shut down multiple times in the last 18 months, mostly for non-compliance with safety procedures.

Necsa’s chief legal advisor Vusi Malebana is now under disciplinary proceedings after being suspended by the current board for publicising governance and legal lapses to the minister, Nehawu and other parties. Necsa acting CEO Ayanda Myoli launched the disciplinary hearings a week ago. He accused Malebana of disseminating confidential and misleading information to Nehawu and others relating to, among other things, alleged plans to retrench workers. Malebana is seeking to interdict the disciplinary hearing and says in an affidavit to the court that he was acting within the law and that all information disclosed was protected by law.

Some at Necsa believe the latest court finding against Radebe takes the oxygen out of this attempt to bring Malebana to heel. In terms of the court finding, the acting CEO may have to vacate his chair within a matter of days and any decisions he has taken will be reviewed.

In response to a statement issued by Malebana last week claiming further irregularities at the nuclear company, Necsa issued the following response: “Necsa is aware of a media statement circulating on social media, however the authenticity remains unverified. Furthermore, Necsa wishes not to be drawn into commenting publicly on employer-employee contractual issues. It will therefore not add its voice on this particular document.”

Necsa subsidiary NTP produces life-saving nuclear isotopes that are used worldwide in the treatment of cancer. In a recent public meeting, new mineral resources and energy minister Gwede Mantashe berated those responsible for the repeated shutdown of the medical production and warned that the company was losing market share internationally.

The standout thing about the ANC is that corruption means never having to say you’re sorry.

So Eskom and all the other failing SOE’s are just problems for the country, and not the fault of the ANC that systematically destroyed them.

Thanks a mil taxpayers and pensioners, we’re coming for your money. After all, you caused all this.

Much of SA’s woes with Eskom and state capture can be put down to this wrecking ball called Radebe.