With Lysychansk under its control, Russia is switching its focus further west into Donetsk, intensifying shelling of the region, according to Ukrainian officials.
By Bloomberg News 5 Jul 2022  07:02 Japan called on Russia to provide more details about a presidential decree that would transfer rights to the Sakhalin-2 natural gas project to a new Russian company.

President Vladimir Putin’s forces closed in on their goal of capturing Ukraine’s eastern region of Luhansk as the country’s troops withdrew from the city of Lysychansk, the last Kyiv-controlled redoubt in the area. The Russian leader made a public display of the seizure and told military commanders to give soldiers who had captured the city a rest.

Ukraine presented a blueprint for reconstruction following Russia’s invasion, which has razed cities, displaced millions and devastated the economy. The plan, unveiled at a two-day conference in the Swiss city of Lugano, includes investments in infrastructure and the climate and digital spheres. Ukraine’s prime minister suggested the bulk of some $750 billion needed for reconstruction could be paid for with seized Russian assets.

With Lysychansk under its control, Russia is switching its focus further west into Donetsk, intensifying shelling of the region, according to Ukrainian officials. Moscow’s forces also hit residential areas, killing nine civilians and wounding 25 there over the last 24 hours. Russia is attempting to blunt counteroffensives by Kyiv’s forces in the Kharkiv region in the northeast as well as the Kherson and Mykolayiv regions in the south, the Ukrainian military said.

Japanese Trade Minister Koichi Hagiuda called on Russia to explain the decree signed by Putin that gave stakeholders, which include Shell and Japanese trading houses Mitsubishi and Mitsui, a month to say whether they’ll take a holding in the new firm.

“Right now, we don’t know when that one month period starts, so we are closely investigating” Hagiuda told reporters in Tokyo. Mitsubishi Corp. and Mitsui & Co. own a combined 22.5% of the Sakhalin-2 project, and a majority of the gas produced there supplies Japan. 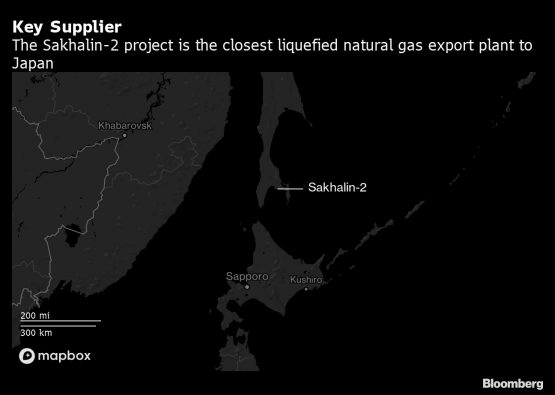 US basketball star Brittney Griner wrote to President Joe Biden and pleaded to bring her and other detained Americans home from Russia, saying she’s terrified she might by there “forever,” the Associated Press reported.

A representative for Griner, a two-time Olympic Gold medalist, delivered the letter to the White House, according to the AP. The basketball star, who was taken into custody about a week before Russia launched its invasion, faces a drug smuggling charge in Russia, where she could serve as many as 10 years in prison if convicted.

US officials have said the WNBA player is being wrongly detained, a signal they believe Griner’s case is political, not criminal. Griner’s wife, Cherelle, has called her “a political pawn.”

Ukraine Estimates Immediate Funding Needs of Up to $65 Billion (8:51 p.m.)

Ukraine has indicated it needs up to $65 billion this year to meet its funding requirements, billions more than its allies have so far been able to pledge.

The amount needed immediately includes so called macro-financial stability assistance for emergency budget funding and logistics infrastructure projects. The figure, which excludes defense and security spending, is part of a larger blueprint for the nation’s longer term reconstruction, which is estimated to exceed $750 billion and was unveiled at a conference in Lugano.

“Right after the war is over and Ukraine achieves victory, we need to implement thousands of rebuilding projects,” Prime Minister Denys Shmyhal said at the conference.

Ukraine’s largest mobile-phone operator, Kyivstar, is struggling to maintain service as its employees are killed or displaced and infrastructure is seized or damaged in the war.

Alexander Komarov, the chief executive officer of Kyivstar, a subsidiary of Veon Ltd., said about 10% of the company’s network can’t function because Russian officials have switched off base stations and captured hardware.

Since the invasion, Kyivstar has been subject to a “tremendous increase in DDos and an even bigger jump in phishing attacks,” Komarov said in a video interview from Lugano.

Ukraine Seeks to Block Exports of its Grain by Russia (6:38 p.m.)

Ukraine is working with the United Nations and Turkey to make sure that “civilized countries” don’t take its grain illegally exported by Russia, President Volodymyr Zelenskiy said during a meeting with Sweden’s Prime Minister Magdalena Andersson in Kyiv.

Unblocking grain exports from Ukraine is difficult and yet possible, Zelenskiy said, adding that he believes UN is ready to lead in making it happen. He said ships need to have security guarantees, except those from Russia, which Ukraine doesn’t trust.

Ukraine expects to harvest 60 million tons of grain this fall, Zelenskiy said, while there are already 22 million tons blocked by Russia in its ports. “We need to export all the grain,” he said. A Russian official was appointed to head the government of the occupied southern Ukrainian region of Kherson, the Tass news service reported on Monday. Sergei Eliseev, a senior official from the Baltic exclave of Kaliningrad, named both Russians and Ukrainians as his deputies, Tass said, citing a statement by Kherson’s Russian occupation authority.

Russia’s seaborne crude exports in the seven days to July 1 rebounded from the previous week’s plunge, but shipments to Asia are slipping, even as flows are diverted to the country’s Black Sea terminal to cut the voyage distance to India.

Aggregate crude flows from Russian ports were up week-on-week by 23%, recovering most of the volume lost over the previous seven days during a brief halt in shipments from the Baltic port of Primorsk. Still, cargoes bound for Asia — a crucial market where China and India have stepped in to prop up Russian exports others have shunned in response to its invasion of Ukraine — were down by more than 15% on both a weekly and four-week average basis from the highs seen at the end of May. Turkey has begun an investigation into the origin of grain aboard a Russian vessel anchored off its Black Sea port of Karasu after Ukraine said the cargo was stolen, senior Turkish officials told Bloomberg. Kyiv has accused Russia of stealing grain from territories it has occupied since its February 24 invasion. Russian Foreign Minister Sergei Lavrov confirmed on Monday the vessel was Russian but said Moscow was still working to clarify what had happened.

The vessel has yet to dock or unload and is waiting off the port as Turkey investigates the origin and trajectory of the shipment, said the officials, who spoke on condition of anonymity due to the sensitivity of the case. Turkey is handling the situation with care as it works to arrange four-way talks with the United Nations, Russia and Ukraine to establish a Black Sea corridor to restart Ukrainian food shipments disrupted by the war, one of the officials said. It may host the UN-backed dialogue as early as next week, he added.

Assets seized from the Russian state and oligarchs should make up the bulk of the $750 billion in aid needed to rebuild the country, Prime Minister Shmyhal said.

“Russia has unleashed this bloody war, they have caused this large-scale destruction — and they must be held responsible for it”, he told delegates at the recovery conference in Lugano. Ukraine lost $100 billion worth of infrastructure during the war, Shmyhal said. He estimated the volume of frozen Russian assets worldwide that could go toward the recovery at between $300 billion and $500 billion.

European leaders are planning an international conference devoted to the rebuilding of Ukraine after the summer, European Commission President Ursula von der Leyen said at the Lugano conference. The aim will be to “bring together the brightest minds and leading global experts on reconstruction to ensure that this generational undertaking is done in the right way,” she said, citing also the role of German Chancellor Olaf Scholz as co-organizer.

Though she didn’t cite any aid targets or pledging of financial assistance in her remarks, she addressed the importance of spending any money wisely to bolster investor confidence.

Benchmark futures, which have more than doubled this year, surged as much as 10% on Monday. About 13% of Norway’s daily gas exports are at risk amid plans to escalate an impending strike by managers, the nation’s oil and gas lobby warned over the weekend.

The Russian leader congratulated Defense Minister Sergei Shoigu after Russian forces took control of a Lysychansk. Speaking in televised comments, Putin told Shoigu to give the units involved in the latest offensive time off to rest and to shift responsibility for continuing operations to other forces.

Shoigu had reported to Putin on Sunday that Russian forces had taken control of the city, a fiercely contested industrial center that was one of the last major targets outside Moscow’s control in Luhansk.

The Ukrainian military said the nation’s jurisdiction over Snake Island, a strategically significant outpost off the Black Sea coast, had been recovered. Natalia Humeniuk, a spokeswoman for the military’s southern command, said in a video briefing that the national flag had been planted on the territory.

Russian forces took control of the island in the western Black Sea early in the war but struggled to hold it as Kyiv ordered a series of missile and artillery attacks. Russia confirmed last week that its troops had left the island.

The US ambassador to China called on the Foreign Ministry in Beijing to stop spreading Russia’s “lies,” in an unusually direct and public rebuke by the top American diplomat in the country.

Ambassador Nicholas Burns made the “request” in response to a question at a government-backed forum Monday about what China could do to resolve the crisis over Russia’s invasion of Ukraine. Burns reiterated Biden’s call for Beijing to avoid helping Moscow carry out the war, before pivoting to a simmering point of contention between the world’s two largest economies.

The European Investment Bank will propose a new 20 billion-euro fund to help finance the reconstruction of Ukraine when donors gather in Lugano.

The fund would aim to mobilize as much as 100 billion euros of investment from other sources over the next 10 years and could potentially be scaled up, according to people familiar with the matter.