Greenland will push ahead with a uranium and rare earths mine despite the objections of Denmark as the melting of the polar ice cap unlocks its natural resources.
By Balazs Koranyi (Reuters) 22 Jan 2014  09:53 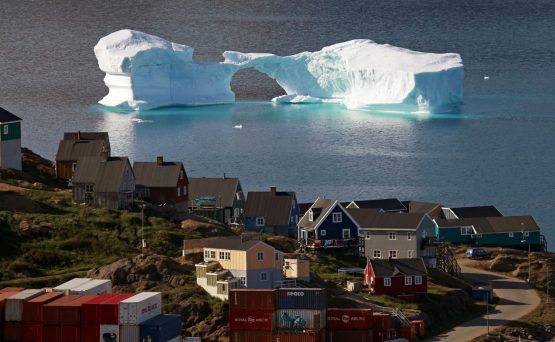 Greenland will push ahead with a uranium and rare earths mine despite the objections of its former colonial ruler and main benefactor as the melting of the polar ice cap unlocks the country’s natural resources, its prime minister said.

Arctic Greenland, with the lowest population density in the world, could open its first big iron ore mine in five years and award the first rare earths exploitation licence by 2017, hoping for riches that could attract thousands of workers and leave the locals in a minority, Aleqa Hammond told Reuters.

“We simply refuse to go under as a culture because of climate change,” Hammond, 48, said on Tuesday on a visit to Norway. “We have to adapt because the ice is disappearing and hunting is no longer the main source of income.

“But climate change gives us a new chance to survive because our minerals become accessible so we’ll adapt,” Hammond, an Inuit woman brought up to skin seals, said.

“We are one of the very few countries around the world where climate change is giving us benefits.”

Greenland has removed a ban on exporting uranium, a byproduct of rare earths processing. That drew the ire of Denmark, which has granted the island autonomy but not the right to conduct security policy.

“The Danish government and we disagree whether it’s Danish jurisdiction because the self-governance act doesn’t say a word about uranium,” said Hammond, whose father died when she was young after he fell through ice while hunting.

“The self-governance act says all minerals belong to the people of Greenland.”

She said a deal with Denmark could be ironed out this year, a boon for the rest of the world as Greenland holds one of the planet’s biggest rare earths deposits. Mining could break China’s quasi-monopoly over the material vital in making modern devices from smartphones to wind turbines.

Still, Greenland has rejected the first rare earths licence request from Tanbreez Mining, a unit of Australia’s Rimbal Pty Ltd, on the grounds that it failed to meet all health and safety rules. A new application could be approved in the current government’s term, which ends in 2017, Hammond said.

Few of the big projects have gone as planned.

London Mining’s $2.35 billion, 15 million tonne per year iron ore mine was earlier expected to open in 2015 but is unlikely to operate for another five years, Hammond said.

London Mining plans to import thousands of Chinese workers to build the mine, a big source of tension in a country with just 56,000 people.

Hammond dismissed those fears. New rules already in place will force miners to respect worker safety and the environment, and outlaw social dumping, protecting domestic workers and their wages, she said.

“No worker from China or Norway or anywhere will have any impact because of these rules,” Hammond said.

“I think this is going to be the biggest protection for a small population that can become a minority in its own country very fast due to the riches the country has.”

In another disappointment for the Greenland government, Cairn Energy, which has already spent $1.2 billion on a failed oil exploration campaign, said on Tuesday that it will not drill in Greenland this year.

The government thinks Greenland’s northeast offshore fields could have 31 billion barrels of undiscovered oil and gas, while the west, including Canadian waters, could hold 17 billion barrels.

It is such a large potential resource that Greenland has set the framework for a sovereign wealth fund, similar to Norway’s $830 billion oil fund, hoping to save cash for future generations.

But so far every exploration attempt has failed, leaving any oil revenue more than a decade away.

The money oil and mining is expected to generate is a prerequisite for Greenland to gain independence as Denmark still gives the country about 3.6 billion Danish crowns ($655 million) a year, covering roughly half of the island’s budget. (Editing by Dale Hudson)