Oil rose amid a broader rally in stocks after a three-day slide, with investors continuing to weigh the fallout from Russia’s invasion of Ukraine and Covid-19 lockdowns across top crude importer China.

Futures in New York climbed above $97 a barrel after slumping 13% over the past three sessions. The war has severely disrupted Russian oil flows, and the International Energy Agency predicted output from the key OPEC+ member will drop by about a quarter next month. Libya’s prime minister said the cartel should boost supply faster to help solve the “energy crisis.”

“Tight markets are generally more volatile and so when you throw in a supply risk as large as Russia, that just takes volatility to another level,” said Warren Patterson, Singapore-based head of commodities strategy at ING Groep NV. “The weakness we have seen in the market over the past week or so does mean that there is little risk premium priced in, which leaves the market vulnerable if the Russia-Ukraine situation was to deteriorate.” 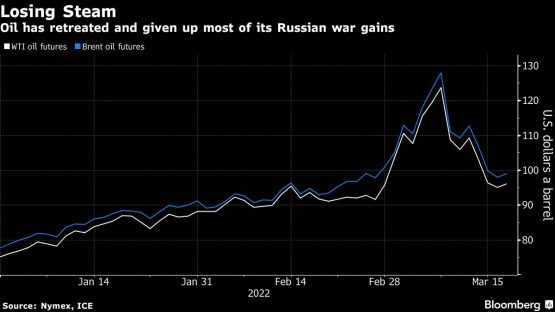 Investors are also monitoring a virus resurgence in China, the world’s largest oil importer. Traffic congestion levels in partially locked down Shanghai are more that a third lower than a year ago and there are also restrictions on movement in the manufacturing hub of Shenzhen and Jilin province.

Rapid developments around the war in Europe and the ensuing sanctions are driving wild fluctuations in the market, and holdings in oil contracts have slumped due to the volatility. UK Prime Minister Boris Johnson said that he’s optimistic Saudi Arabia may raise output after a meeting with the kingdom’s Crown Prince, but he got no guarantees that would occur.

While buyers are shunning Russian crude despite heavy discounts, the nation is planning little change to loadings of its flagship Urals crude from its Baltic and Black Sea ports in early April. It’s not clear whether the shipments will all be able to find buyers, so actual loadings may be different.

Russia said a Ukrainian proposal that it would become a neutral country but retain its own armed forces could be viewed as a compromise, offering for some hopes for a cease-fire. A Ukrainian official cautioned that issues remained and said talks hadn’t progressed significantly.

Brent crude had surged to nearly $140 a barrel earlier this month, only to swiftly fall back to below $100 this week, exceeding the threshold of 20% used to characterize a bear market. The extent of the liquidation shows up in open-interest data. Holdings in oil futures have fallen to the lowest since 2015 across the main Brent and WTI contracts combined.

The US Federal Reserve, meanwhile, raised interest rates by a quarter percentage point, launching a campaign to tackle the fastest inflation in four decades even as risks to economic growth mount.