Oil advanced ahead of an OPEC+ meeting on supply after surging on the European Union’s plan for a phased ban on Russian crude.

West Texas Intermediate rose toward $109 a barrel after closing up 5.3% on Wednesday. The EU plans to ban Russian oil over the next six months and refined fuels by the end of the year, to increase pressure on Vladimir Putin over his invasion of Ukraine. The bloc is also targeting insurers in a move that could dramatically impair Moscow’s ability to ship oil around the world. 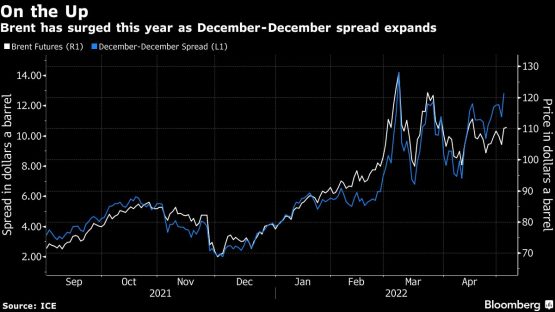 OPEC+ will likely ratify another small production increase when members gather later Thursday, with the threat to demand in China from anti-virus lockdowns offering another reason for caution. Still, there are signs that a lack of capacity is hobbling the group’s ability to deliver even modest increases.

Oil has surged more than 40% this year as Russia’s invasion of Ukraine disrupted flows, fanning inflation and prompting central banks including the US Federal Reserve to tighten policy. At the same time, the Organisation of Petroleum Exporting Countries and allies including Russia have been restoring supplies that were shuttered during the pandemic at only a restrained pace.

“Gains are well below what I would consider worthy of such a huge hit to supply,” said Daniel Hynes, senior commodities strategist at Australia and New Zealand Banking Group Ltd. “The sanctions are likely to reduce supply for the foreseeable future, while we still expect China to control the current Covid-19 outbreak and ease restrictions. This will lead to an extremely tight market.”

Chinese markets reopened Thursday after a three-day break, with investors weighing Beijing’s vow to offset the hit to growth from the lockdowns. A set of policies to promote investment, consumption and exports may be accelerated, according to two reports in China Securities Journal that cited analysts.

The EU aims to conclude the sanctions package by the end of the week, or May 9 at the latest, according to diplomats. To get the curbs over the line, the bloc needs to address concerns from Hungary and Slovakia on phase-out timing, and queries from Greece on banning transport of oil between third countries.

At present, Russia’s oil exports are running at a record pace as Moscow manages to reroute cargoes previously sent to the US and elsewhere to alternative buyers, especially in Asia, JPMorgan Chase & Co. said in a note.

US inventory data, meanwhile, showed declines in nationwide holdings of gasoline and distillates. Stockpiles of diesel on the East Coast slumped to the lowest on record last week as local refiners rushed to supply global markets, suggesting a potential shortage of the industrial, transport and heating fuel.

Oil markets remain in backwardation, a bullish pattern marked by near-term prices trading above longer-dated ones. Among key differentials, the spread between Brent’s two nearest December contracts was well above $13 a barrel on Thursday. That’s more than triple the gap at the start of the year.