Oil rose after a two-day decline as an industry report showed US gasoline stockpiles shrunk further ahead of the summer driving season and Saudi Arabia said there’s nothing more it can do to tame the market.

West Texas Intermediate futures climbed above $110 a barrel after losing around 3% over the previous two sessions. The American Petroleum Institute reported that inventories of the motor fuel fell by 4.22 million barrels last week, according to people familiar with the figures. Stockpiles are at the lowest level for this time of the year since 2013.

The market has been gripped by a volatile period of trading since late February following Russia’s invasion of Ukraine and a Covid-19 resurgence across China. Saudi Arabia’s foreign minister said that the kingdom has done what it could for the oil market, adding that there was no shortfall of crude. 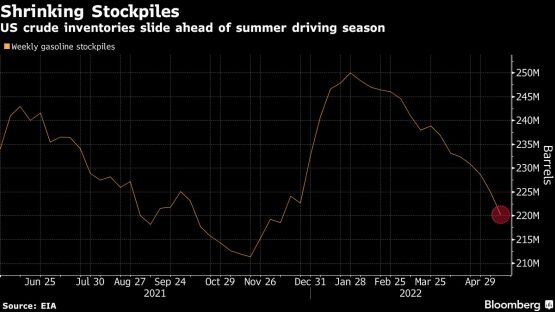 The war in Ukraine has upended trade flows and fanned inflation worldwide, with pump prices in the US repeatedly breaking records. Unseasonably high gasoline exports from America are also eroding domestic stockpiles ahead of the summer driving season that starts this weekend.

Saudi Foreign Minister Prince Faisal bin Farhan said “oil supply right now is relatively in balance” during a panel session at the World Economic Forum in Davos, Switzerland. “The kingdom has done what it can.”

The US is leading a co-ordinated release of global crude reserves in an effort to tame rising energy prices. The Department of Energy made its latest announcement on the sale of strategic stockpiles, offering as much as 40.1 million barrels of predominantly sour crude.