Oil declines as traders assess US stockpiles, outlook for dollar

Brent for September settlement was 1.1% lower at $106.22 a barrel on the ICE Futures Europe exchange after closing on Tuesday at the highest since July 4.
By Elizabeth Low, Bloomberg 20 Jul 2022  08:36 Oil fell after a three-day climb as investors weighed data that pointed to a rise in US inventories and the outlook for the dollar.

West Texas Intermediate for September, the contract with the highest volume and open interest, edged lower in early Asian trading after rising more than 8% in the prior three sessions. That advance was supported by weakness in the US currency, a pipeline outage, and signs physical markets remain tight. 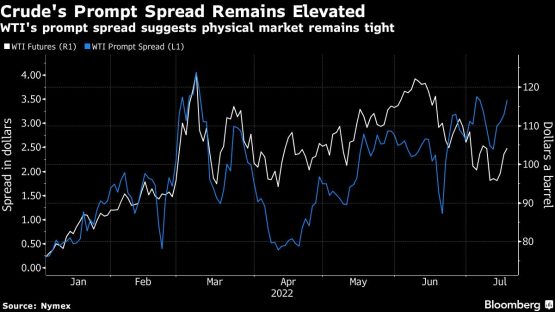 US inventories of crude expanded by almost 2 million barrels last week while gasoline holdings also rose, estimates from the American Petroleum Institute showed, according to people familiar with the figures. Official data from the Energy Information Administration will follow later on Wednesday.

Crude has fluctuated around $100 a barrel this month as traders weigh the impact on demand from a potential recession, as well as broad appetite for risk and wider market moves. After hitting a record last week, the dollar weakened, making commodities including oil more attractive.

Oil markets are steeply backwardated, a bullish pattern marked by near-term prices commanding a premium to later-dated ones. Brent’s prompt spread — the difference between its two nearest contracts — was at $4.37 a barrel, more than $1 higher than a week ago.