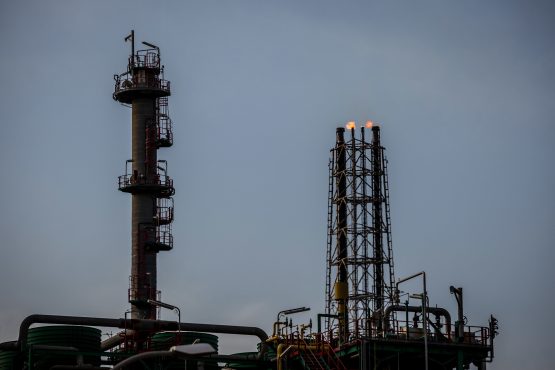 Oil took a breather after a three-day rally as concerns over a demand-sapping recession filtered back into the market, overshadowing signs that global stockpiles and supply continue to tighten.

West Texas Intermediate fell to trade near $111 a barrel after adding around 7% over the previous three sessions. Federal Reserve officials played down the risk that the US economy will tip into recession even as they raise interest rates, but concerns about global growth are persisting.

“Recessionary fears have certainly appeared on the oil market radar and may continue to grow with time,” said Vandana Hari, founder of Vanda Insights. “What keeps holding up prices is bouts of renewed fear over supply.” Oil is heading for the first monthly decline since November after being hit by fears of a global economic slowdown, but prices are still up almost 50% this year. Time-spreads are also flashing bullish signs, with a contract known as the Dated-to-Frontline swap — an indicator of the strength in the key North Sea market — hitting a record of more than $5 a barrel.

Global oil markets have tightened after a rebound in economic activity, with Russia’s invasion of Ukraine exacerbating the squeeze by upending trade flows. OPEC+ is expected to rubber-stamp another modest supply increase for August this week, although the cartel has struggled to meet its targets this year.

The market is facing supply disruptions from Libya to Ecuador, while industry data showed US crude stockpiles fell further at the key storage hub of Cushing. The Energy Information Administration said a delayed weekly oil report will be published Wednesday, putting an end to a two-week delay.

The Group of Seven leaders agreed on Tuesday that they want ministers to urgently evaluate how the price of Russian oil can be curbed to limit the energy proceeds that the Kremlin uses to finance its war in Ukraine. The main idea floated over the past few weeks has been some kind of cap.