Oil retreated as China’s worsening virus resurgence raised concerns about demand in the world’s biggest crude importer, while rebels in Yemen announced a temporary pause in hostilities against Saudi Arabia.

West Texas Intermediate and Brent futures fell more than 3% in Asian trading after Shanghai said it will lock down half of the city in turns to conduct mass Covid-19 testing to try and stem an outbreak. Yemen’s Houthi rebel leader announced a three-day truce on Saturday after an escalation of attacks on the kingdom over the past week, according to a TV report.

Oil is still poised for a fourth monthly gain after Russia’s invasion of Ukraine roiled markets. Most buyers are shunning the OPEC+ producer’s crude as they try and navigate financial sanctions and reputational risks, while Germany is planning to wean itself off almost all Russian fossil fuels within two years. Fighting in Europe continues, with the war now in its second month. 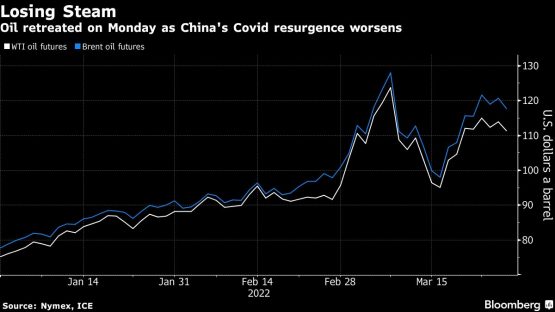 Shanghai — a city of 25 million people — will first lock down areas east of the Huangpu River, which includes its financial district and industrial parks, for four days starting Monday. Then the restrictions will shift to the city’s west for another four days, according to a statement from the local government.

“It’s natural for the complex to start pricing in demand concerns,” said Vandana Hari, founder of Vanda Insights in Singapore. “A major swing factor for oil prices right now is the status of diplomatic efforts by Russia and Ukraine. I wouldn’t rule out continued wild” price swings, she added.

Crude rose on Friday after Houthi rebels claimed responsibility for a series of attacks on Saudi Aramco facilities, including an oil storage site in Jeddah. Just two hours after the halt to hostilities was announced on Saturday, the rebels accused Saudi-led coalition fighter jets of launching strikes on Houthi targets in the Yemeni capital Sanaa, according to Al-Masirah TV.

Brent remains deeply backwardated, where near-dated contracts are more expensive than later-dated ones, although it’s eased over the past week. The prompt timespread for the global benchmark was $3.15 a barrel in backwardation, compared with $3.70 a week ago.

The US, meanwhile, said reviving a nuclear deal with Iran may not happen soon after recent requests from Tehran, including that Washington removes the Islamic Revolutionary Guard Corps from its list of terrorist organisations. Iran is an ally of Russia, and its war in Ukraine is also complicating negotiations.