Oil is set for a weekly loss after choppy trading in which concerns over a demand-sapping slump clashed with signals of tight supply.

West Texas Intermediate was above $103 a barrel, putting the US benchmark on course for a weekly fall of 4%. Prices have swung in a range of more than $16 this week — the biggest since March — as both WTI and Brent briefly dropped below $100.

Investors remain concerned that restrictive US monetary policy could herald a recession, and oil has been dragged lower alongside other commodities. On Friday US employment figures beat expectations, suggesting hiring needs are so far eclipsing concerns about the economic outlook. 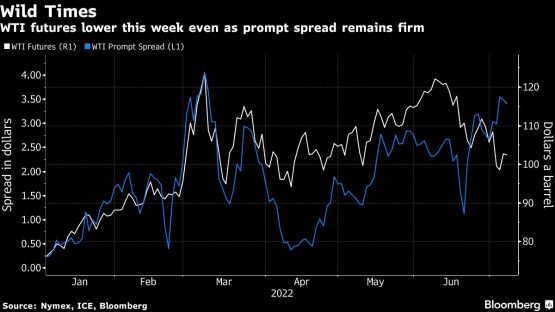 Still, physical signals remain robust, especially in the US. In addition, there may be interruptions to supplies. A key export route for Kazakh oil risks being suspended as it appeals a Russian court order for it to temporarily shut down.

Crude’s volatile trading means that it’s well down from last month’s high but still up more than 35% this year following Russia’s invasion of Ukraine. The complex market outlook has spurred banks to offer starkly different scenarios for prices, with Goldman Sachs Group Inc. remaining broadly bullish while Citigroup Inc. has said the commodity is at risk of a significant tumble.

“Concerns about recession have brought considerable pressure to bear on the prices of industrial commodities such as crude oil and copper of late,” said Carsten Fritsch an analyst at Commerzbank AG.

In China, meanwhile, investors are tracking efforts by Beijing to buttress growth after anti-virus lockdowns hurt the economy and energy consumption in the first half. The Ministry of Finance may allow local governments to sell 1.5 trillion yuan ($220 billion) of special bonds for infrastructure funding.