West Texas Intermediate traded above $110 a barrel in Asia after a long holiday weekend in the US. The benchmark is about 2% higher than Friday’s close as there was no settlement on Monday. Key market timespreads remain robust, indicating that there’s solid demand for near-term crude supplies. 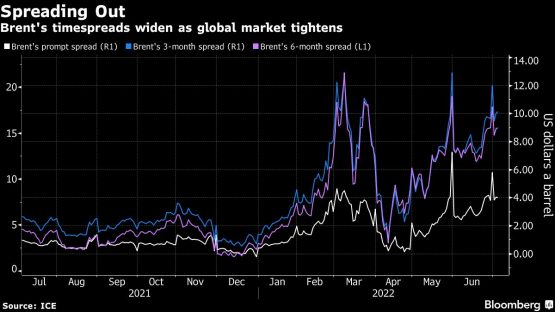 Oil has started the third quarter in strong form after dropping in June, when concerns about an economic slowdown spurred the commodity’s the first monthly loss this year. While Russia’s invasion of Ukraine has roiled crude flows and lifted prices, the jump in energy costs has fanned inflation. That’s pushed central banks to raise rates, triggering risks growth will stall.

“I don’t think sentiment has fundamentally shifted to a positive tone yet,” said Daniel Hynes, senior commodities strategist at Australia & New Zealand Banking Group Ltd. “Further signs of tightness in the physical market will be required.”

Still, the crude market remains in backwardation, a bullish structure marked by near-term prices trading above longer-dated ones. Brent’s prompt spread — the difference between its two nearest contracts — was above $4 a barrel in backwardation on Tuesday, up from about $2.50 a barrel a month ago.

Traders are also tracking China’s efforts to contain renewed Covid-19 outbreaks and enable Asia’s largest economy to reopen fully. That would bolster consumption and offset the drag from slowdowns in the US and Europe.

Oil’s rally has prompted western leaders to demand the Organization of Petroleum Exporting Countries and its allies pump more. On Monday, U.K. Prime Minister Boris Johnson urged Saudi Arabia to ramp up oil output, seeking to cool record fuel prices. That echoes a similar plea from US President Joe Biden, who is due to visit Middle Eastern suppliers later this month.

In welcome news for Biden, retail gasoline prices in the US have eased from a record above $5 a gallon in mid-June. Pump prices were near $4.80 on Sunday, according to figures from auto club AAA, after dropping for 20 consecutive days in the longest losing run in more than two years.