Oil declined as the prospect of more demand-sapping virus restrictions in China overshadowed signs of a tightening market.

West Texas Intermediate dropped near $103 a barrel after posting a loss last week in volatile trading. Virus cases continued to climb in Shanghai and other regions, with new sub-variants providing a challenge to the country’s Covid Zero strategy. Concerns that the US may tip into a recession are also hanging over the market as the central bank raises rates to combat inflation.

“Covid numbers are ticking up again,” said Stephen Innes, managing partner at SPI Asset Management. “Although the possible demand impact of a recession continues to weigh on sentiment, the prevailing view, at least for now, is that the longer-term structural issues facing the oil market will support prices.” 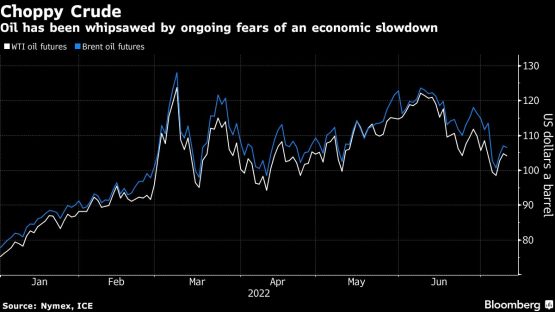 Oil dipped below $100 a barrel last week before rebounding as the market was whipsawed by competing supply and demand outlooks. US President Joe Biden is scheduled to visit Saudi Arabia this week during a tour of the Middle East as he seeks to tame rising energy prices that are weighing on the economy.

There are some signs of relief for Biden. Gasoline prices have fallen for 26 days — including the single biggest daily drop in more than a decade. It’s the longest streak of declines since April 2020. Motor fuel prices are a major contributor to inflation and a central issue in US elections.

Shanghai recorded 69 new infections for Sunday, the most since late May and up from 57 the day before. Elsewhere, the refining hub of Shandong reported 80 local cases and Beijing announced one infection.

The market is still grappling with tight supply, in part due to upended trade flows from Russia after its invasion of Ukraine. Time-spreads have firmed in a bullish backwardation structure, which indicate scarce supply.