Oil fell at the end of the week — trimming a seventh weekly gain — as investors weighed China’s bumpy return from strict virus curbs.

West Texas Intermediate futures slipped for a second session to trade below $121 a barrel. Fresh lockdowns in parts of Shanghai are raising concerns about demand as the nation cautiously lifts broader virus restrictions. If China does see a rapid recovery in activity, it will put further strain on a market that has tightened on rebounding consumption and disrupted Russian flows. 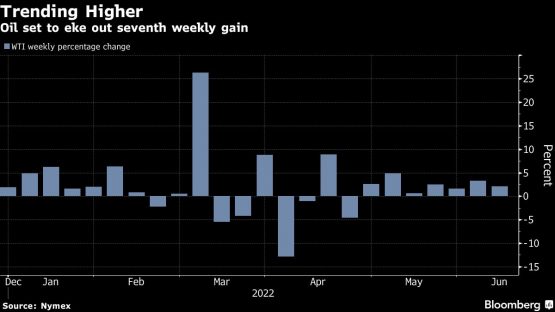 “Demand sentiment is neutral at best,” said Vandana Hari, founder of Vanda Insights. “Lower consumption in China has been balanced out by the summer bump in the US. The upward push on prices is entirely from the supply side.”

Oil has maintained its upward momentum this year through bouts of volatile trading after Russia’s invasion of Ukraine in late February. Goldman Sachs Group Inc. this week boosted its price forecasts into 2023, while OPEC warned that most members are “maxed out” on crude production. The European Union is also working toward a ban of Russian crude imports to member states.

Shanghai will lock down seven districts this weekend to mass test millions as Covid-19 cases continue to emerge in the community. Top producer China National Petroleum Corp. this week forecast rising oil demand in the third quarter, but cautioned of further disruptions from Covid-19 outbreaks.

US gasoline stockpiles are at the lowest seasonal level since 2014 as the nation ramps up its summer driving season, typically a peak period for consumption. However, drivers are facing record pump prices that keeping climbing, which is starting to lead to some demand destruction.