Russian natural gas shipments to Europe via the Nord Stream pipeline to Germany are due to stop on Monday for planned annual maintenance.
By Bloomberg News 11 Jul 2022  16:22 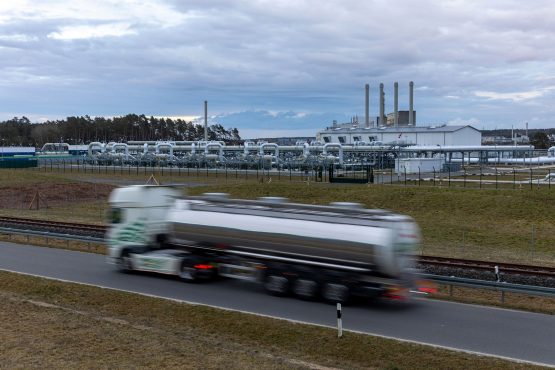 Russian natural gas shipments to Europe via the Nord Stream pipeline to Germany are due to stop on Monday for planned annual maintenance, and Western allies fear President Vladimir Putin will use the opportunity to cut off flows for good. Even so, gas prices fell Monday after Canada said it would return a stranded turbine for a key Russian pipeline to Germany.

The death toll continues to mount in Ukraine after Russian rockets hit an apartment building in Donetsk, killing at least 18 civilians, as the Kremlin’s forces were grinding their way through the region. President Volodymyr Zelenskiy will soon announce a cabinet shuffle and consolidation of ministries to try to weed out waste and corruption.

Prior to the order, residents in the Donetsk and Luhansk separatist republics and in the Kherson and Zaporizhzhia regions of Ukraine were able to utilize the fast-track procedure. Large parts of those areas are occupied by Russian forces.

Russia’s current account surplus hit a record of $70.1 billion in the second quarter of the year, as surging revenues from energy and commodity exports helped offset the impact of US and European sanctions.

Grain crops are being destroyed in the southern Mykolayiv and Odesa regions of Ukraine as Russian shells hitting the fields ignite fires, Natalia Humeniuk, a spokeswoman for the military’s southern command, said during a video briefing.

“Their main aim is to destroy everything which they can’t capture and appropriate immediately,” she said, adding that grain depots and elevators are also being targeted. She didn’t elaborate on the size of fields being destroyed as result of attacks.

Romanian prosecutors said they’re starting an investigation into alleged crimes against humanity committed by Russia during the war in Ukraine.

Prime Minister Mark Rutte visited Bucha, Irpin and Borodianka and will hold a joint press conference with Zelenskiy later on Monday, a spokesperson said by phone.

Rutte’s last trip to Ukraine was before the Russian invasion in February.

The probability of an economic contraction has increased to 45% from 30% in the previous survey of economists polled by Bloomberg and 20% before Russia invaded Ukraine. Germany, one of the most vulnerable members of the currency bloc to cutbacks in Russian energy flows, is more likely than not to see economic output shrink.

The rising cost of living is taking an increasing toll on business and consumers who’re emerging from two years of the Covid-19 pandemic. Lower shipments of gas from Russia, meanwhile, pose a threat to winter energy deliveries. At the April 2008 Bucharest Nato Summit, Angela Merkel and Nicholas Sarkozy were both opposed to Ukraine joining Nato because they believed that Putin would see this as a declaration of war. Europe ignored them and got rid of them politically. Now Europe, and Ukraine in particular, is paying the price for its geopolitical ignorance.

The destruction of wheat fields and the blockage of grain exports are in the best economic interests of both the USA and Russia. That is why this war will drag on for another decade.