‘The 21st is going to be a key day, more for the outlook for gas supplies than the ECB,’ said Kaspar Hense, a senior portfolio manager at BlueBay Asset Management.
By Naomi Tajitsu, Bloomberg 13 Jul 2022  10:31 The planned reopening of a key Russian gas pipeline next week may be a bigger deal for the euro than the first interest-rate hike in a decade by the European Central Bank.

Both are set for July 21. While the ECB’s plans to start lifting rates have been well flagged and hence priced in by markets, there’s more doubt over whether Russia will actually restore gas flows to Europe after maintenance on the Nord Stream 1 pipeline is completed.

Government ministers across the continent have been openly talking about the risk of a complete shut off, a scenario that would see energy prices spiral and would likely lead to a recession. That would spell big trouble for the common currency, already teetering on the edge of parity with the dollar.

“The 21st is going to be a key day, more for the outlook for gas supplies than the ECB,” said Kaspar Hense, a senior portfolio manager at BlueBay Asset Management.

Russia’s supply of gas has already been running at only 40% of normal levels after Moscow cut flows earlier this year. Further disruption might raise the prospect of rationing ahead of winter, when energy demand rises. It would also put continued rate hikes by the ECB at risk.

So far the ECB’s plans to lift borrowing costs from sub-zero levels have failed to prop up the currency, since other major central banks have moved much faster to tighten policy and tackle inflation. Money markets are betting it will lift rates by at least 125 basis points this year, yet the Federal Reserve has already done more than that.

That’s dragged the euro down to a 20-year low versus the dollar. The currency is now closely tracking moves in natural gas prices, with a growing number of market participants citing Dutch gas futures as a key driver of the euro in recent weeks. 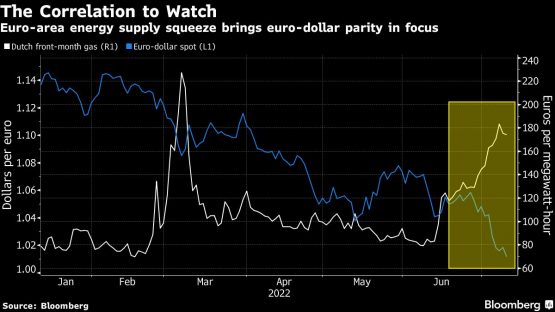 “The worst case (total stop of gas flows) brings recession and probably another 10% fall by the euro from here,” Kit Juckes, chief currency strategist at Societe Generale SA, wrote in a note. “The best case, continuation of the status quo, leaves markets nervous and the euro only able to manage modest short-covering relief.”

While a total halt of gas supplies is not UBS Group AG strategists’ base case, they see such a scenario leading the euro to drop toward 90 US cents. They think it would also drive benchmark 10-year German debt yields down to 0%, with the rate having slid this week on the risk.

“If gas is cut off, I’m thinking euro-dollar could be 90 (US cents) — then we’re probably 60% priced for severe gas shock, which I think is playing out,” said Aaron Hurd, a portfolio manager at State Street Global Advisors in Boston. “People are legitimately worried about whether or not production is turned back on after maintenance.”