S.Africa’s DMR and Chamber of Mines to face off in court

‘Once empowered always empowered’ stalemate to be resolved by the courts.
Sungula Nkabinde 31 Mar 2015  22:15 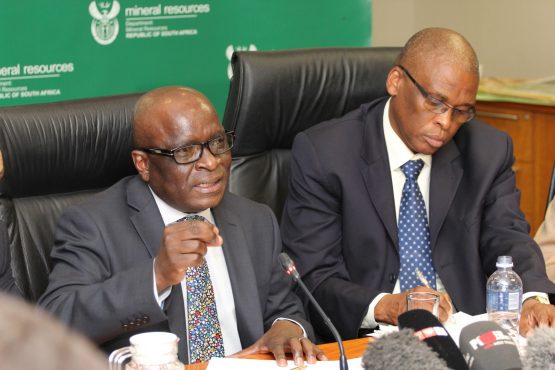 According to Department of Mineral Resources (DMR) Minister, Advocate Ngoako Ramatlhodi, the matter of black ownership is, in principle, the only contentious issue within the Mining Charter. Specifically, the 26% black ownership to be achieved by all mining rights holders by the end of 2014, as stipulated by the 2010 amended charter, has ruffled many feathers in so far as it seeks to impose more responsibility on miners to share their wealth with historically disadvantaged South Africans, over and above what they may have done in the past.

Presenting the DMR’s assessment of compliance with the mining charter, Ramatlhodi said this issue would now have to be resolved in the courts.

“Despite (an extensive consultative process) the stakeholders are not of the same mind on the principles applicable to assessing the ownership element. We have agreed to approach the courts for a declaratory order to guide us in the correct interpretation,” said Ramatlhodi.

The ‘once empowered, always empowered’ principle, as it has been dubbed, refers to the notion of whether it should suffice for companies to have had a 26% black ownership at any time prior to the end of 2014, as per the charter. Ramatlhodi does not think so, saying that the DMR interprets the mining charter as expecting to see black ownership as of January 1 and onwards.

“The essence of the charter is clear in that black ownership should not be compromised,” he said.

Explaining the point of contention, Chamber of Mines (COM) head of economics Monique Mathys said that when the Mining Charter was amended in 2010, there was a clause that excluded transactions that companies had done for empowerment purposes whereby the involved BEE party had subsequently sold all or some of its assets, thereby dissolving that company’s black ownership status.

It is not incumbent on the minister to seek clarity on legislation in order to hold companies that do not adhere to the mining charter to account. But Ramatlhodi said approaching the courts was the path of least resistance, and would be the fastest route to achieving a resolution. Even though he could not guarantee that any decision made would not be appealed, he hoped that taking this approach – where clarity on the law is sought out rather than penalties being unilaterally pronounced, challenged and inevitably appealed until the matter reach the constitutional court – it would encourage a spirit of compromise and a commitment towards achieving common goals.

“We are dealing here with very sensitive issues and, where there are legal remedies, it is better to go that route than to impose regulations…Why not work collaboratively?” he asked.

President of the COM Mike Teke said this was a proactive and necessary step to promoting regulatory certainty for the mining industry and showed that both the DMR and COM had recognised the need for the court to provide certainty.

Norman Mbazima, Chief Executive of Kumba Iron Ore, said: “We welcome the Minister’s collaborative approach and we look forward to the resolution of the difference of opinion relating to the ownership element of the Mining Charter.”

Assessment of compliance with Mining Charter

Ramatlhodi said much work still needed to be done towards achieving transformation of the mining industry and that, despite efforts by many companies to comply with the charter, there were some corners of the industry that were not fully supportive of the process. The deadline for submissions was on Tuesday, but the minister said 80% of them had already been received and was thus able to present highlights of the assessment of compliance with the charter, explaining that a full report would be made available at the end of April.

Highlights of the assessment results as of 29 March 2015