Silver and platinum fell. Palladium advanced 1.7% after tumbling to the lowest level since February 17 on Friday.
By Ranjeetha Pakiam, Bloomberg 28 Mar 2022  07:24 Gold dropped as the US dollar strengthened, sapping demand for the safe-haven asset after a weekly advance.

Bullion climbed 1.9% last week as the war in Ukraine burnished gold’s haven appeal, with holdings in exchange-traded funds backed by the metal rising for a 10th straight week. Investors are seeking a store of value amid inflationary pressures stoked by soaring commodity prices partly caused by the conflict in Europe and ensuing sanctions. 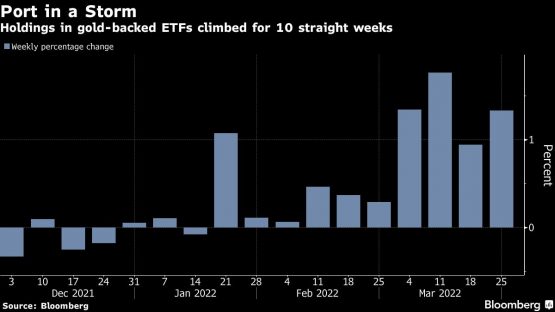 On Monday, the Bank of Japan said it will purchase an unlimited amount of 10-year bonds at a fixed rate, the second such move in less than two months in a bid to keep rising yields in check. The yen weakened against the stronger US dollar, hurting demand for bullion as it’s priced in the greenback.

“Gold is facing pressure from the higher US dollar,” said Nicholas Frappell, global general manager at Sydney-based ABC Bullion. The Japanese central bank’s action was positive for the dollar, which gave gold a knock, he said.

On the war front, in-person talks between Ukrainian and Russian negotiating teams will resume this week, officials said. Meanwhile, President Joe Biden sought to clarify his call for the removal of Vladimir Putin, saying he wasn’t seeking regime change after European allies raised concern and critics said he was further inflaming tension with Russia.

“Gold is being pulled in many directions by many different factors at the moment,” said Howie Lee, an economist at Oversea-Chinese Banking Corp. “This morning’s dip could be due to profit-taking after last week’s gains.”

Silver and platinum fell. Palladium advanced 1.7% after tumbling to the lowest level since February 17 on Friday.