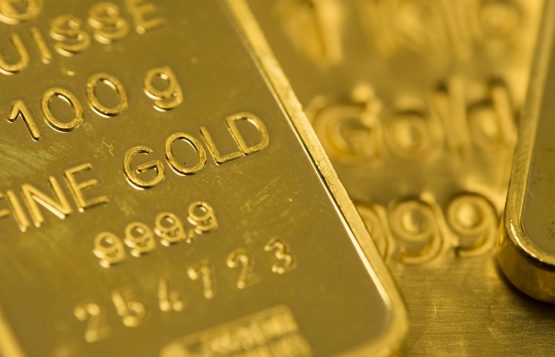 Gold is proving remarkably resilient, gaining almost 7% this year as investors shrug off surging real yields and strengthening dollar to focus on political and economic risk.

While traditional yield and currency drivers suggest bullion is overvalued, demand for the haven asset remains strong. That’s because gold buyers piling into exchange-traded funds are taking a pessimistic view of the Federal Reserve’s ability to cool decades-high inflation without hurting the economy. For them, gold is a hedge against soaring prices and low growth.

“Gold has effectively been questioning the Fed’s ability to raise actual real rates, while delivering a soft landing for the economy,” said Marcus Garvey, head of metals strategy at Macquarie Group Ltd. “You could argue gold has very heavily priced the Fed not being successful.” 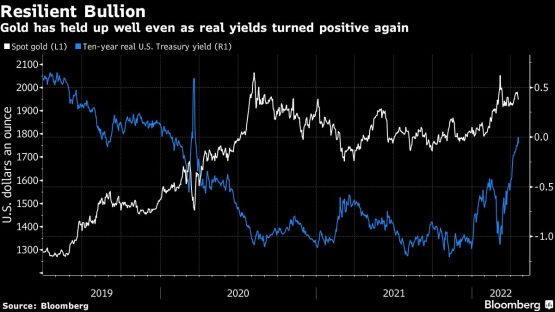 The global economic outlook remains murky as a robust recovery from the pandemic is tempered by the war in Ukraine and China’s continuing battle against Covid-19. Any escalation in the conflict, which is already weighing on growth forecasts, could further burnish the appeal of gold. 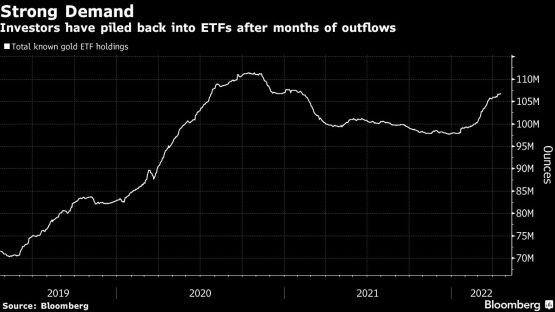 Sanctions on Russia could also herald a more far-reaching shift that’s bolstering bullion. Influential analysts like Credit Suisse Group AG’s Zoltan Pozsar predict that the seizure of about half the Russian central bank’s foreign exchange reserves will result in a new monetary paradigm where gold plays a greater role.

“The current price has less to do with inflation and rising yields and more to do with geopolitical risks and the Russian central bank pivoting towards accumulating alternative sources of wealth,” said David Chao, global market strategist for Asia Pacific ex-Japan at Invesco Ltd. “I’m a bit surprised that gold isn’t at higher prices.”

At the margin, the blacklisting by western markets of gold from Russia – the world’s No. 2 producer — may also be having an impact. Still, for many observers, there are signs that gold’s run may soon come to an end. Inflation-adjusted Treasury yields turned positive for the first time in two years Wednesday, while the dollar is trading near the highest since July 2020, making bullion — which is priced in the US currency — more expensive for foreign investors.

The outcome of the Fed meeting in two weeks time will be gold’s next big test as policy makers seek to tame inflation.

“We believe the economy will remain resilient while price pressures are showing some early signs of peaking,” Carsten Menke, an analyst at Julius Baer Group Ltd, wrote in a note. “Assuming no worsening of the war in Ukraine, the demand for gold from safe-haven seekers should fade.”