Gold rose above $1 800 an ounce as investors mulled the economic outlook before Federal Reserve minutes that will be scanned for clues on US monetary policy.

The precious metal has started July on a positive note, notching its highest close in more than two weeks on Monday. While a recovery in major economies is gathering pace, there are still bets that patches of weakness — such as rising unemployment in last week’s US jobs report — will deter hawkish moves by central banks. 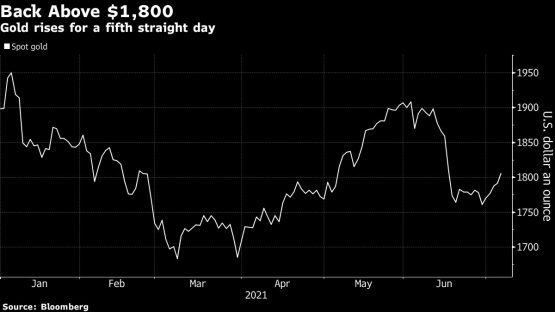 On Wednesday, the Fed will release minutes from its June meeting, which roiled markets by hinting at a sooner-than-expected raising of interest rates. The notes of the meeting should offer more insight as gold investors mull an economic picture clouded by inflationary pressures and threats from coronavirus variants.

“My feeling is this is just a technical bounce for gold after the very sharp declines we saw in June,” Howie Lee, economist at Overseas-Chinese Banking Corp. said by phone. “It looks like it doesn’t want to cross $1,800 but if there is any deterioration in economic numbers, that could be a catalyst for gold to go higher.”

June was bullion’s worst month since late 2016, with investors shunning the precious metal on signs that governments are poised to rein in pandemic stimulus measures. That drove the dollar and Treasury yields higher, weighing on non-interest-bearing gold.

The US needs to create a fire somewhere so that the sheep run to buy more Dollars.