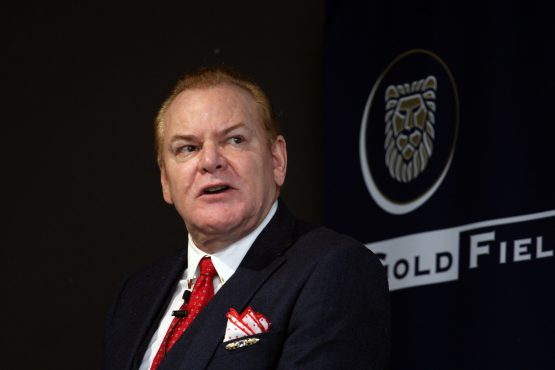 CEO Nick Holland surprised many with his view of the gold price, saying he prefers to focus on improving operating performance and keeping production costs down. Picture: Moneyweb

Gold Fields announced what CEO Nick Holland refers to as good figures for the first six months of its financial year on Thursday. “For me, it is most pleasing to see the performance behind the numbers.”

Read: Gold Fields returns to profit as it extends life of Ghana mine

Profit increased to $70.5 million in the half year to June compared to the loss of $79 million in the first half of last year. Management also highlighted the fact that Gold Fields produced $49 million of net cash flow during the six months.

One of two huge new mines, the Gruyere open pit mine in Australia, has been completed and  fully commissioned during the last few months.

“I was in the gold room when the first three bars of gold were poured [just before the end of the reporting period],” Holland told a briefing of analysts and reporters in Johannesburg on Thursday morning.

Dubbed Australia’s newest gold mine, Gruyere is a huge open pit mine unlike anything seen anywhere in SA.

Holland mentioned that it takes nearly an hour to drive to the bottom of the pit in what we call a bakkie in SA. The pit is around 1.2km deep, which Holland says is not much by Australian terms with some open pit mines as deep as 3km.

Gruyere produced 2.5 million tons of ore in the first few months of operation while the new plant was put through its paces, producing the first three gold bars totalling 1 139 ounces. Full scale mining started in July and the mine will reach its full production capacity of 8.2 million tons of ore per annum towards the end of the year.

Redevelopment of the group’s other big project, the Damang open pit mine, has also been completed and production and costs were better than planned. The mine produced 112 000 ounces of gold in the first six months, more than double the 55 000 ounces it produced in the first half of last year.

The figures are also astounding. Holland mentioned that more than 102 million tons of material was moved during the last 30 months. This was 19% ahead of target and gold production was 29% ahead of target, although the higher production levels resulted in higher development costs compared to plans. But Holland says things will normalise in the second half year.

“I am pleased to say that Damang generated positive free cash flow during the last six months,” he says.

Even the troublesome South Deep, Gold Fields’s only remaining mine in SA, performed well. Production picked up remarkably in the second quarter after a slow start to the year in the first quarter.

Read: Gold mining is far from dead in SA

South Deep posted a 67% increase in gold production in the second quarter compared to the first, producing more than a ton of gold. Holland says productivity increased significantly, which resulted in lower costs, so much so that South Deep could boast about a positive contribution to cash flow of R71 million.

However, Holland cautioned against too much optimism, saying that one swallow does not make a summer.

“But we believe we can build on this good performance.”

A look at the overall numbers shows that Gold Fields did everything right in the past six months. Gold production increased to 1.08 million ounces (995 000 ounces in the first half of 2018) and total sustainable costs decreased somewhat from $1 169 to $1 106 per ounce.

It was noteworthy that Holland only mentioned the gold price in passing during his presentation of the results. When asked for his views on the gold price – which just happened to put in a strong run in the last week or so to above $1 500 – his answer must have surprised many: “I realised that the longer I am in gold mining, the less I know about the gold price. I have been in [the industry] for 22 years; I don’t know.”

He says the gold price may have run too hard, but maybe not. “We’ll enjoy the higher gold price while it lasts, but remain focused on better operating performance and still aim to keep costs low,” says Holland.

Shareholders will be glad to know that he did say dividends would increase if the gold price stays higher.

Shareholders will also be glad that Gold Fields has tackled the problem of high debt by issuing new bonds to the value of $1 billion. The bonds were issued in two tranches with several maturity dates and at much lower interest rates than the bonds that mature in a few months’ time.

Holland says the new projects coming on stream, and overall good results from its other mines, will help to reduce debt further towards year end. More good news is that the bulk of the expansion projects has been completed and capital expenditure will decrease.

Management reaffirmed its target to produce 2.13 to 2.18 million ounces of gold in the current financial year at a total cost of $980 to $995 per ounce.

The high gold price and weak rand probably made for quite a few happy shareholders yesterday morning.

Gold Fields on the up

Australia. The average mine worker salary compared with South Africa.
Google it up. The figures telling a story. Missing in that is a weak Rand. Strong, yes.