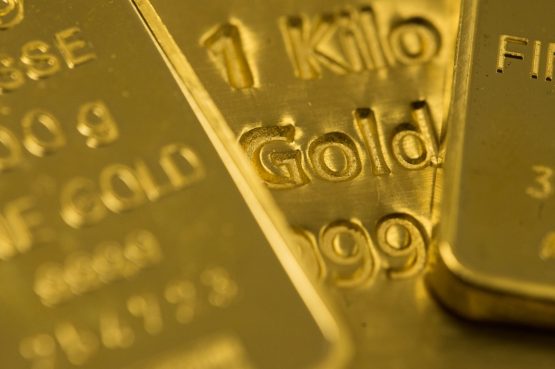 Gold is headed for a third straight weekly gain as bond yields and the dollar continued their downtrend after surging at the start of the year.

Applications for US state unemployment insurance unexpectedly plunged to a fresh pandemic low, weighing on demand for haven assets and pushing bullion down from the highest in nine weeks. The metal did trim its loss after Bloomberg reported President Joe Biden would propose almost doubling the capital gains tax for wealthy individuals, which hammered US stocks.

Gold is heading for a small weekly gain as US bond yields continue to trend lower after rising in the first quarter, making the non-interest bearing metal more attractive. Also adding support is weakness in the dollar and a revival in consumer demand in Asia. Shipments from Switzerland to India and China rose last month, indicating renewed buying by the top consumers after a year on the sidelines. 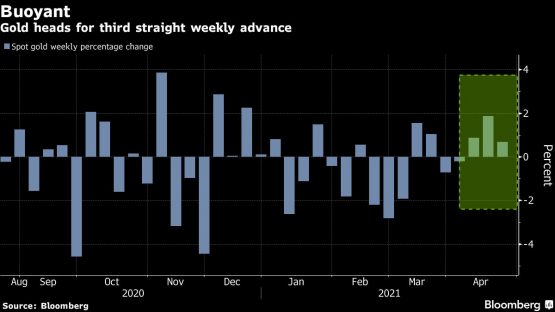 That’s unlikely to send prices higher in the long term though, for which gold relies on investment demand. Outflows from exchange-traded funds — which were crucial to bullion’s rally to a record price in August — have slowed but not stopped in recent weeks, while net-bullish bets on the metal by hedge funds on the Comex remain low.

Spot gold was little changed at $1 785.08 an ounce at 9:55 a.m. in London and is on track for 0.5% gain this week. Prices dropped 0.6% on Thursday after earlier rising to $1 797.93, the highest level since February 25. Silver declined and platinum advanced, while palladium steadied after surging to a record this week. The Bloomberg Dollar Spot Index retreated 0.3% is poised for a third weekly decline.

From 1st April the $gold price has moved in sync with the weakening USD index. The longer term trends align to this correlation principle but seldom get it together with such alacrity. The uptick for gold is otherwise overdue as it emerges from this over-extended mid-wave correction and my updated interim standard probability target, within this current bull trend, is $2592 at end of August 2023.

From your mouth to G-d’s ears.