Gold traded near a one-month high — after jumping the most since March on Thursday — as US-China tensions and a deepening global slowdown buoyed demand for haven assets.

Bullion surged 1.5% on Thursday and is heading for a run of three straight weekly gains after China likely fired missiles over Taiwan during military drills. Beijing has responded aggressively to US House speaker Nancy Pelosi’s visit to the island this week, the highest ranking American politician to go there in 25 years.

There were more signs that the fight to cool inflation will weigh on global growth. The Bank of England unleashed its biggest rate hike in 27 years as it warned the UK is heading for more than a year of recession, while Cleveland Federal Reserve Bank President Loretta Mester said US interest rates needed to be raised above 4%. 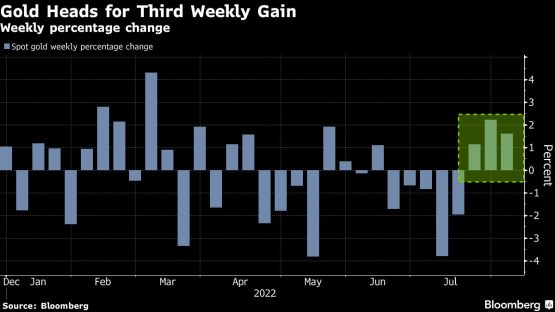 Gold has risen about 6% from a low on July 20, benefiting from a weakening dollar and falling US bond yields. Traders will be looking at US nonfarm payrolls data Friday for clues on the Fed’s tightening path. The report will likely show that hiring softened in July, according to Bloomberg Economics.

“Safe-haven demand continues to support gold ahead of the non-farm payroll data,” said Gnanasekar Thiagarajan, director at Commtrendz Risk Management Services. “It could get a bit choppy ahead of the data. Central banks acknowledging recession is also underpinning sentiment for the precious metal, which was under pressure due to rising yields.”