Gold rose to the highest level in eight months as investors seek haven assets amid simmering geopolitical tensions over Ukraine.

Bullion’s appeal as a store of value and an inflation hedge has seen its price hold up, despite the diplomatic efforts being undertaken to defuse the Ukraine situation. Gold and oil provide the cleanest hedges for the geopolitical risk, Goldman Sachs Group Inc. analysts led by Jeffrey Currie said in a report.

President Vladimir Putin countered US warnings that Russia may invade Ukraine within days by staging televised meetings with his foreign and defense ministers that emphasised de-escalation of tensions and continued efforts to find a diplomatic resolution. Moscow has repeatedly denied it plans to invade. 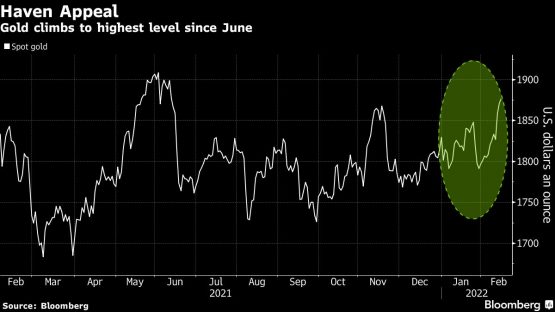 A potential headwind for non-interest bearing bullion are the increasing bets on more aggressive tightening by the Federal Reserve. Fed Bank of St. Louis President James Bullard said the US central bank needed to move forward its plans to raise interest rates to underline its inflation-fighting credibility.

In a CNBC interview Monday, Bullard repeated his view that the central bank should raise interest rates by 100 basis points by July 1. Still, Fed Bank of Kansas City President Esther George said the bank should take a systematic approach to removing accommodation but be careful to not “oversteer.”

“Gold is starting to garner strong interest as the need grows for protection against a Fed policy mistake, geopolitical risks, and growth concerns,” said Edward Moya, a senior market analyst at Oanda Corp. “The $1 880 level should prove to be key resistance for gold, but if that does not hold, bullish momentum could take prices to the $1 900 level.”