Bullion ticked lower after Yellen said Sunday that President Joe Biden should push forward with his $4 trillion spending plans even if they trigger inflation that persists into next year, adding that a “slightly higher” interest rate environment would be a “plus.” That helped boost Treasury rates, making non-interest bearing gold seem less attractive. 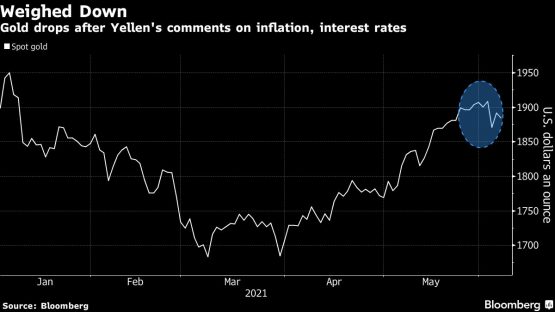 Gold has been hovering around $1 900 an ounce amid a debate around price pressures and speculation over whether the Federal Reserve will start talks on the idea of tapering its massive bond-buying program. On Friday, gold jumped as a Labour Department report showed job gains in May fell short of economists’ estimates, diminishing expectations for early monetary tightening. Traders will look to Thursday’s US consumer-price index report for more clues on whether the central bank will be forced to curb inflation.

Stagnating prices have led to a slowdown in the revival of investor interest in gold. Hedge funds trading the Comex only marginally increased their net long exposure to the metal, according to weekly CFTC data. Exchange-traded fund holdings have been little changed in recent weeks after seeing inflows through most of May.