Tensions over Russia’s military buildup near Ukraine is buoying gold and palladium amid demand for havens and concerns over potential supply disruptions.

Bullion’s appeal as a store of value is being burnished by risk aversion in markets and a surge in inflation worldwide, with prices gaining on Friday in the biggest advance in almost four months, even as the Federal Reserve gears up to raise rates. The yield on 10-year Treasuries ticked up Monday after tumbling on Friday from a 2019 high, weighing on non-interest bearing gold.

US National Security Advisor Jake Sullivan told CNN on Sunday there’s “a distinct possibility that there will be major military action very soon” in Ukraine. Russia has repeatedly denied it plans to invade its neighbour and Kremlin officials have accused the US of stoking “hysteria.” Russia produces around 40% of freshly mined palladium, a metal that’s mostly used in catalytic converters.

“Palladium markets were already anticipating a recovery in auto catalyst demand this year,” said Gavin Wendt, senior resource analyst at MineLife Pty. “But prices have been further spurred on by market fears about increasing threats to supplies by any conflict with respect to Ukraine.” 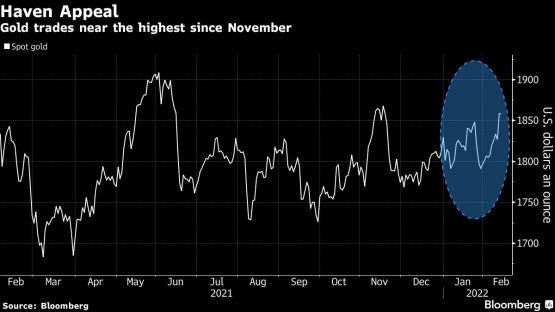 Markets are also watching oil’s surge toward $100 a barrel for the first time since 2014, which is threatening to deal a double-blow to the world economy by further denting growth prospects and driving up inflation. Data last week showed US consumer prices surged more than expected in January, sending the annual inflation rate to a fresh four-decade high.

“Risk-off sentiment and the drop in real yields should help gold but a rising dollar may thwart further gains,” said Nicholas Frappell, global general manager at Sydney-based ABC Bullion. The advance in crude oil could add to concerns over inflation and growth, which will likely boost gold further, he said.

The Bloomberg Dollar Spot Index was steady after rising 0.2% Friday, while silver and platinum both advanced.