Gold rose from near a three-month low as the dollar declined with Treasury yields ahead of closely-watched US inflation data.

Bullion has been under pressure as the Federal Reserve tightened monetary policy to fight accelerating consumer-price gains. That helped push bond yields higher and has propelled a gauge of the US currency up around 5% since the end of March, making the non-interest bearing precious metal less attractive. 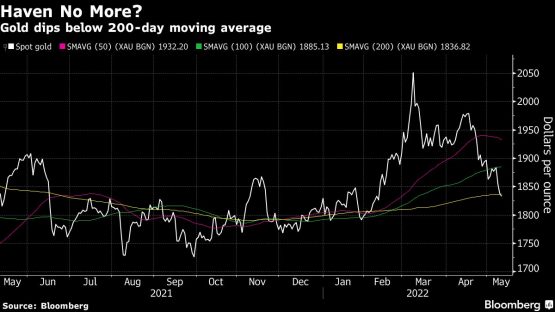 US inflation figures due Wednesday may provide more clues on the pace of the Fed’s interest-rate path. A lower than expected reading may soften concerns about an aggressive hiking cycle, which have hurt gold in recent weeks.

“The main cause of gold’s struggles is the ongoing rise in the dollar,” said Nicholas Frappell, global head of institutional markets at ABC Refinery in Sydney. “I take this as a continuation of risk aversion over a number of concerns, ranging from equity indexes, and China’s Covid Zero policy impacting on wider commodities and energy.”

The technical picture for silver is quite poor and there’s “scope for a really large move lower,” although it might start to attract dip-buying, according to ABC’s Frappell.