Gold steadied after posting the biggest weekly gain since May as investors weighed prospects for tighter US monetary policy and concerns over an economic slowdown.

Bullion hit the lowest level since March 2021 last week, only to rebound as US Treasury yields eased. After raising rates in June by the most since 1994, Federal Reserve policy makers are expected to approve another 75 basis-point hike when they meet July 26-27. 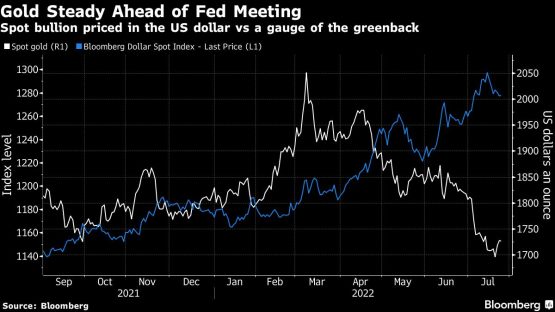 Gold is heading for a fourth monthly loss as Fed tightening and a stronger dollar dim its allure as a haven, overshadowing concerns about inflation and a slowdown. At the weekend, while former Treasury Secretary Lawrence Summers cast doubt on the likelihood of a soft landing for the US, incumbent Janet Yellen said that she doesn’t see any sign the economy is in a broad recession.

Additional downward pressure on gold has come from waning investor interest, with holdings in bullion-backed exchange-traded funds ebbing for a sixth week, according to initial data compiled by Bloomberg. That’s cut holdings to the lowest since early March.

“Assuming the Fed hikes by 75 basis points in July, we believe the bulk of the near-term downside risk has been priced in, but the longer-term trend is still to the downside,” said Suki Cooper, a precious metals analyst at Standard Chartered Plc. “That downside is likely to be buffered given elevated inflation, concerns over a recession, and a flight to safety.”

Spot gold was little changed at $1 727.67 an ounce at 11:29 a.m. in Singapore. Prices sagged as low as $1 680.99 on Thursday, before ending the week 1.1% higher. The Bloomberg Dollar Spot Index was steady after easing 1% last week. Silver was flat, while palladium and platinum fell.