The potential political and economic fallout between Russia and the West over Ukraine and Crimea could have a major destabilising effect on the global economy and give a further boost to the gold price.
6 Mar 2014  19:04 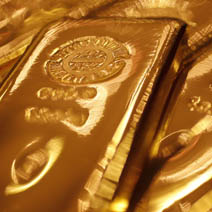 Well Russia may not be going to invade Ukraine militarily, but may end up annexing Crimea by default despite the protests of a kicking and screaming West, not to mention the Ukraine transitional government.  If this then leads to U.S. and EU economic and political sanctions being implemented against Russia then one doubts either side will come out without taking serious financial casualties.  Russia would be bound to retaliate, or President Putin would lose domestic respect – which is something he would be unlikely to contemplate – and given the still-fragile state of the global economy this has enormous dangers for both sides.  The Russian economy is very weak too and the ruble is diving while a default by Russia on its Western debt, which has already been threatened, could further destabilise the whole Western banking system with bank collapses and the start of a new downwards spiral.  In short, the ‘peaceful’ solution could be almost as bad as that if there were to be a shooting war.  It looks to be a lose-lose situation and the current standoff may be turning out to be a massive political poker game, with some very high stakes to play for and which neither side can afford to lose.

I have been taken to task over some of my earlier analysis of the Ukraine/Crimea situation – see Crimea, the Fed, China and Gold as perhaps being too swayed by the Russian propaganda machine in my analysis although I was attempting (obviously unsuccessfully) to put a fairly balanced viewpoint forward.  However to my mind both Russia and the West have painted themselves into a corner from which it will be difficult to extricate themselves without making virtually impossible decisions.  Somehow some kind of compromise agreement needs to be reached which does create a face-saving solution for both sides.  As one analysis puts it this could result in President Putin winning the battle over Crimea, but losing the war in terms of the rest of Ukraine’s likely future political allegiances.

But in my prior article I was perhaps guilty of attributing too little importance to the Ukraine situation with respect to the gold price and pointing to other factors which I considered to be more valid.  This may be true in the long term, but the potential economic fallout should tit-for-tat financial and political measures be implemented is an enormous potential short to medium term destabilising factor for Western and Russian economies.  And instability in the global financial sector could be sufficient to give gold the breakout potential the gold bulls have been looking for – particularly if there is an adverse effect on the U.S. economy and on its putative recovery –  the return of U.S. growth being seemingly the principal grounds for the more bearish bankers’ assessments on gold.

Thus the bankers who had been predicting far lower prices for gold this year have so far been put on the back foot yet again by the recent gold price surge – but it may still be too soon to be sure that they are mistaken in their analyses.  The recent gold price chart seems to bear remarkable similarity to that prevailing June to September last year when gold rose over $200 before drifting down for the rest of the year and losing all of the gain and more by December.  But if indeed sales out of the ETFs have come to an end, or are even morphing into purchases as was seen last month, and Eastern demand holds up or even rises, then there will not be sufficient additional Western physical gold supply to support a similar downturn this year.

Gold did hit the upwards path today during U.S trading on a weaker dollar, and some impact of doubts over Ukraine no doubt having a bearing too.  The price pattern will be interesting to follow over the next week or so as the political fallout over Ukraine and Crimea continues – but also keep an eye out for news on Chinese and Indian purchases.    While Ukraine could have a serious  impact on the gold price regardless of whether Russia  turns rhetoric into further on-the-ground action or not, it is still other factors which will probably have the greater longer term effects.  But financial moves over Ukraine have the potential for raising the starting price for any ensuing longer term gold recovery – or collapse.