Bullion is down about 10% from a peak in mid-March, after the concerns that Russia’s invasion of Ukraine might sprawl into a broader conflict dissipated.
By Ranjeetha Pakiam, Bloomberg 7 Jun 2022  07:16 Gold could be heading for another rally, with warnings over a global economic slowdown paving the way for a fresh push toward $2 000 an ounce.

A potent mix of decades-high inflation, geopolitical turmoil and growing talk of recession should be bullish for the traditional haven, according to speakers interviewed ahead of a precious metals conference in Singapore this week.

Bullion is down about 10% from a peak in mid-March, after the concerns that Russia’s invasion of Ukraine might sprawl into a broader conflict dissipated. But with top banking executives now warning about fresh economic shocks, the situation is ripe for stagflation, which would be bullish for gold.

“After decades of massive deficit spending and ultra-loose monetary policies, we are heading toward a period of stagflation,” said Gregor Gregersen, founder of Silver Bullion Pte. “In this kind of environment, safe-haven assets like physical gold and silver are some of the best things you can own.” 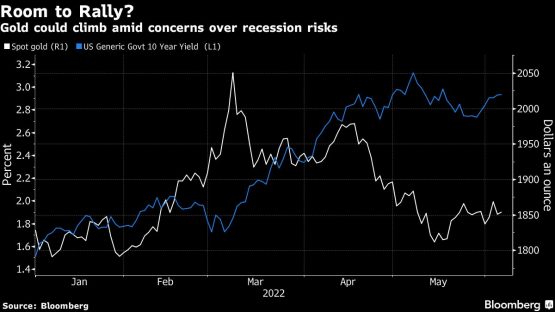 Gregersen predicts gold and silver could rise to around $2 000 an ounce and $26 an ounce respectively by the end of the year, and could exceed those levels should there be unexpected “black swan” events.

According to Rhona O’Connell, head of market analysis for regions including Asia at StoneX Group, bullion prices are facing resistance at $1 930 an ounce, but if that level is cleared then $2 000 could be reached, propelled by technical trading.

“The economic and geopolitical fundamentals are more supportive of gold than they would be bearish,” O’Connell said in an interview before the conference.

Even as the specter of higher rates and rising bond yields weighs on the non-interest bearing precious metal, the Federal Reserve’s aggressive tightening stance has also triggered recession fears, particularly in the US.

The gold price decline in recent months has come as the US central bank started its hiking cycle, when officials raised rates for the first time since 2018 and signaled increases at all six remaining meetings this year.

Goldman Sachs Group Inc. President John Waldron and JPMorgan Chase & Co.’s chief executive officer Jamie Dimon last week both warned of shocks to the economy amid challenges including risks from inflation and the fallout from the war in Europe. These uncertainties could well see more investors seeking a store of value.

Still. the hawkish Fed, higher real rates, and a relatively robust US dollar backdrop are among factors weighing on bullion, said Citigroup Inc., which cut its three-month gold point-price target by $300 to $1 825.

The bank has kept its six-to-12 month forecast at $1 900, with elevated asset market volatility and stagflation tail hedges likely underpinning support at around $1 800, according to a June 1 report. Citigroup shifted its base case outlook to neutral for the rest of this quarter.

Physical consumption could be supportive. The Perth Mint has seen strong physical demand for gold and silver minted bars and coins this year, especially in the US, according to Cameron Alexander, manager of business development and industry research at Australia’s largest precious metals refinery.

“The immediate outlook remains robust but it is difficult to predict whether the elevated level of demand we have seen recently can continue into the second half,” said Alexander, who’s also a speaker at the conference. “The recent surge in inflation numbers being printed in Europe and the US would suggest that demand for precious metals may continue for some time yet.”