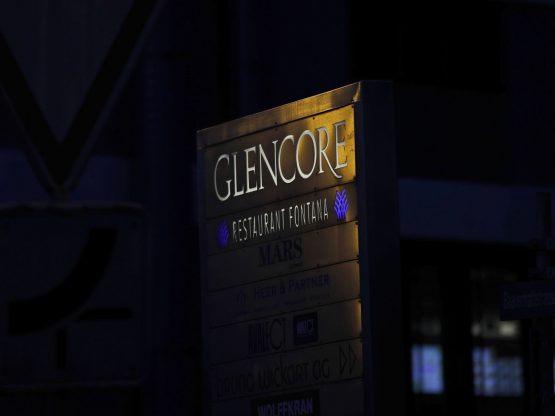 The global mining giant faces even more scrutiny after being fined around R17bn by US authorities related to corruption, bribery and commodity price manipulation in several countries. Image: Stefan Wermuth/Bloomberg

The Portfolio Committee on Mineral Resources and Energy was pressed last week to review all Glencore mining licences and contracts awarded in South Africa after the company was fined more than $1.1 billion (R17 billion) by the US Justice Department for corruption, bribery and commodity price manipulation.

James Lorimer, the Democratic Alliance’s shadow minister for minerals and energy affairs, said the scale and severity of the corrupt practices to which Glencore pled guilty cover a number of African countries such as Nigeria, Cameroon, Ivory Coast and Equatorial Guinea.

“We need to make sure that these corrupt practices do not extend to South Africa, and that is why I asked for a revision of all its mining licences and contracts in this country …

“There is a pattern of corporate behaviour here which is disturbing and we are entitled to know how Glencore conducts itself in this country,” added Lorimer.

The call for further investigations gained traction last week, with the Africa Energy Chamber calling for the company to be suspended from the Norwegian-based Extractive Industries Transparency Initiative (EITI).

“We find it ironic that EITI, which has campaigned against African countries joining the initiative, still has Glencore as a member – especially if you consider the fact that Glencore’s involvement with EITI began while the company was engaging in the very behaviour EITI strives to eradicate,” says the chamber.

Read:
Glencore says bribery days are over
An oil and gas supercycle may be on the way, and that’s huge for Africa

EITI chair Helen Clark expressed concern about Glencore’s actions, and called on the company to apply the lessons learned to its ongoing work with EITI. There is no mention of consequences.

“Imagine if this was an African country; imagine the international community’s response. It wouldn’t stop with penalties and expressions of concern. Not only would the company be fined, but the management teams would be fined and jailed,” the Africa Energy Chamber adds in a strongly worded statement.

“We’d comment on the likelihood of EITI suspending the African company’s status as a supporting member, but since EITI has resisted African involvement, it’s moot. This double standard is unjust. It sends the wrong message to Africans,” it says.

The chamber wants Glencore’s dealings in African countries to be examined on a local level, and for those African officials who accepted bribes to be held accountable.

“Investigations should be opened, and Glencore should be forced to come clean about the full extent of its corrupt business dealings, after all Glenore is a member of EITI. Though based on its years of corrupt actions, Glencore should be suspended as an EITI supporting company,” says the chamber.

Glencore has been disinvited from Africa Energy Week, which will be held in Cape Town in October.

Giving impetus to these calls for further investigation is the fact that the current and former CEOs of Glencore, Gary Nagle and Ivan Glasenberg, are both South Africans.

Nagle, a 22-year veteran at Glencore, succeeded Glasenberg as CEO in 2021.

Public Protector Busisiwe Mkhwebane told Radio 702 that she is considering looking into Glencore after the latest revelations, and is already looking at the company’s ties to Eskom after a case was started in 2020.

A statement issued last month by the US Justice Department says the fine against Glencore follows a decade-long investigation into violations of the Foreign Corrupt Practices Act and a commodity price manipulation scheme.

The company was found to have concealed “corrupt payments and bribes through intermediaries for the benefit of foreign officials across multiple countries”.

Glencore agreed to retain an independent compliance monitor for three years. The department has agreed to credit nearly $256 million (close to R4 billion) in payments that Glencore makes to resolve related parallel investigations by other domestic and foreign authorities.

“The scope of this criminal bribery scheme is staggering,” said US Attorney Damian Williams for the Southern District of New York.

“And it did so with the approval, and even encouragement, of its top executives. The criminal charges filed against Glencore in the Southern District of New York are another step in making clear that no one – not even multinational corporations – is above the law,” added Williams.

In a Sens statement issued on May 25 Glencore addressed the investigation and its findings as follows: “Glencore cooperated with authorities and has made substantial investments to enhance its Ethics and Compliance Programme. Resolutions involve separate payments to resolve investigations into bribery and market manipulation. Payments for these resolutions [are] not expected to differ materially from existing provision. Swiss and Dutch investigations remain ongoing.”

Nagle said in a statement: “We acknowledge the misconduct identified in these investigations and have cooperated with the authorities.”

He added: “This type of behaviour has no place in Glencore, and the board, management team and I are very clear about the culture that we want and our commitment to be a responsible and ethical operator wherever we work. We have taken significant action towards building and implementing a world-class Ethics and Compliance Programme to ensure that our core controls are entrenched and effective in every corner of our business.”

Read:
Glencore boss wants to pay up and move on from corruption probes
Glencore sets aside $1.5bn as graft probes seen closing
Glencore subpoenaed for money laundering and corruption

Glencore has also pled guilty to bribery charges brought by the UK Serious Fraud Office, though the penalty will only be decided later this month.

The company also agreed to pay $39.6 million (R615 million) under a resolution signed with the Brazilian Federal Prosecutor’s Office in connection with a bribery investigation in in that country.

Telling it as it is:Glasenberg’s Glencore and Oppenheimer’s Anglo American and De Beers were the nation original state captures.

From the way things are unfolding, it seems that Glencores birth and growth was based on corruption. Over the years it had baffled me as to how Glencore managed to grow so big so quick and now it all makes sense.

I am certain that the South African investigation into Glencore will reveal how its founder Mr Glasenberg operated all these years. It is his DNA that has spread all over the company.

quick hit : Glencore bought our strategic oil reserves for about half the market value in exchange for selling Optimum coal mine to former prisoner jacob zuma accomplices.