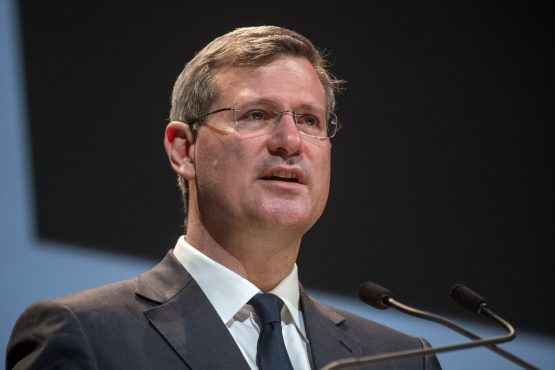 Rio Tinto Group fired two of its top executives over a payment connected to a giant iron ore project in Guinea in West Africa.

The world’s second-biggest mining company said on Thursday it has terminated the contract of  Alan Davies, chief executive of its energy and minerals unit, as well as the contract of Legal & Regulatory Affairs Group Executive Debra Valentine after an investigation.

Davies was suspended November 9 over the $10.5 million payment to consultant Francois de Combret in 2011 for assisting negotiations with Guinea’s President Alpha Conde on the Simandou project. Davies said on Thursday Rio had no grounds to fire him and that he will take legal action.

“The board concluded that the executives failed to maintain the standards expected of them under our global code of conduct,” the London-based company said in the statement. “The board’s decision does not pre-judge the course of any external inquiries into this matter.”

Davies said he had not been privy to Rio’s internal investigation report, nor had any evidence of the reasons his termination.

“Rio Tinto has made no effort to abide by due process or to respect my rights as an employee and it has given me no opportunity to answer any allegations,” he said in an e-mailed statement.

Representatives for Lamprell Plc, the UK-listed engineering company where Valentine is a director, didn’t immediately reply to an e-mail outside business hours on Thursday requesting comment from Valentine. She stepped down from Rio last week, having previously informed the company she planned to retire in May.

“Rio is taking no prisoners on this one,” Investec Plc analysts wrote in a note on Thursday. “Previous management will be glad to be outside the blast radius.”

Rio last week said it had alerted authorities, including the US Department of Justice and the UK’s Serious Fraud Office, to the payment made to de Combret in 2011. An e-mail exchange discussing the payment shows former CEOs Tom Albanese and Sam Walsh, who was then head of Rio’s iron ore unit, were aware of the payment. Walsh, Albanese and de Combret have declined to comment.

The $20 billion Simandou project, which Rio agreed to exit last month, was once one of the world’s most prized mineral assets. It has been at the center of a power struggle for almost a decade having attracted some of the biggest mining companies, Israeli billionaire Beny Steinmetz and powerful advisers including investor George Soros and former UK Prime Minister Tony Blair. It’s also spawned many legal challenges and a US grand jury probe into potentially corrupt payments to Guinean officials.

“Many people across Rio Tinto are still shell-shocked,” Rio’s Chief Executive Officer  Jean-Sebastien Jacques said in an internal memo seen this week by Bloomberg News. “The day I was made aware of a potential issue we launched an investigation. It wasn’t a decision we took lightly. We will fully cooperate with the authorities. Their investigations may take several years.”

The board made the decision on Davies and Valentine after reviewing the findings so far by the internal inquiry, the company said. In accordance with contract termination, neither executive will be eligible for any short-term incentive plan awards for 2016, it said. Rio will also cancel all unvested incentive plan awards from previous years.

“This treatment of me and my past and recent colleagues is totally at variance with the values and behaviours of the company to which I have devoted my professional life,” Davies said in the statement. “My rights are fully reserved, and I have been left with no option but to take the strongest possible legal action in response.”

Davies, who joined Rio in 1997, had been among internal challengers to become CEO ahead of the appointment of Jacques, who took the role in July. Bold Baatar, a Mongolian and former investment banker, will replace Davies on Rio’s executive committee as energy and minerals chief executive, the company said. Davies was accountable for Simandou at the time of the payments.