The Melbourne-based resources giant, which mines metals and coal used for both steelmaking and fuelling power plants, is increasingly optimistic that there’ll be a surge in demand for some of its products as consumers opt for electric vehicles, or EVs, and other renewable energy technologies.

“As you see more renewables and EVs, we also will see an impact on copper demand,”  Fiona Wild, BHP’s vice president, sustainability and climate change, said Tuesday at a conference in Shanghai hosted by Bloomberg New Energy Finance. “EVs at the moment have about 80 kilograms of copper in them. As they become more efficient, you see a greater amount of copper in those vehicles, so there’s always upside for copper.” 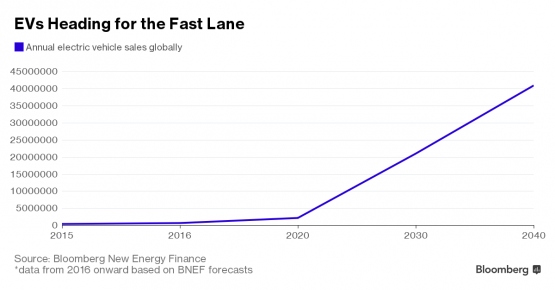 One million EVs were sold between 2010 and 2015, largely driven by regulatory mandates in important auto markets including the US, China and Europe, BNEF said last month. By 2020, about 2.2 million EVs will be sold globally, up from 460,000 expected in 2016, according to the research company. Electric vehicles require a lot more copper wiring than standard internal combustion engines.

Copper is the poorest performer this year on the London Metal Exchange, with a gain of just 4%, compared with more than 54% for zinc. The metal is suffering amid a surge in supply this year, as demand slows in China.

Copper accounts for 27% of BHP’s commodity sales, second after iron ore at 34%, according to the company website.

“As a powerful offset to substitution, copper is superbly placed to benefit from expanded end use demand on the back of observed trends in technology, which we expect will become material from around the middle 2020s,” Vicky Binns, vice president, marketing minerals, wrote on BHP Billiton’s website on Oct. 31.

Copper usage in electric cars will contribute to China’s demand growing at about 3.3% a year up to 2020, according to the government’s Five-Year Plan for the metals industry published by the ministry of industry and information technology last month.

Demand for metals in lightweight transportation and new energy vehicles is part of a “new normal” for metals as the economy slows, the ministry said. The country became the world’s biggest copper consumer amid a construction boom and build-up of the electricity grid.

BHP Billiton has invested several hundreds of millions of dollars since 2007 in the research and development of technologies to reduce greenhouse gases, including carbon capture, it said in a report last year. The technology that would catch gases from fossil-fuel plants and could become commercially viable in the next 15 to 25 years depending on government policies, it said at the time.

The Paris climate accord negotiated last year, which seeks to limit temperature increases from pre-industrial levels to well below 2 degrees Celsius, is “more substantial and ambitious,” than expected, BHP said in a statement earlier this month.

“People often think of energy challenges in terms of coal and oil and gas,” BHP’s Wild said. “But it’s much broader than that.”