Is gold set to tear even higher? Just when the vaccine rollout and economic optimism left gold looking like last year’s metal, it staged a recovery.

Bullion is one of the best-performing commodities this month, erasing almost all of this year’s losses. Investors have been lured back by gold’s appeal as an inflation hedge, while the Federal Reserve maintains its monetary stimulus and says price pressures should prove temporary. Spot gold was little changed at $1 895.41 an ounce on Friday and is up more than 7% in May.

Diego Parrilla, who runs the Quadriga Igneo fund, is among those who recently boosted their exposure to gold, saying that central banks won’t risk increasing interest rates to combat inflation for fear of “pricking the enormous bubbles” they’ve created.

“We have entered a new paradigm that will be dominated by deeply negative real interest rates, high inflation, and low nominal rates — an extremely supportive environment for gold,” said Parrilla, who manages $350 million. Still, gold is ultimately a haven asset which conventional logic suggests should suffer as the economy booms. So can the latest rally be sustained? Here are four key charts to watch.

It’s been the hottest question in finance this year, and probably the biggest one for gold: will current inflationary pressures be transitory or persistent?

If you ask the Fed, the answer is the former. Parts of bond market disagree, with market-based measures of long-term inflation expectations rising to the highest since 2013 earlier this month.

That’s a sweet-spot for gold, which benefits when monetary policy keeps bond rates low even as inflation persists. Real yields on Treasuries have slipped deeper into negative recently, burnishing the appeal of bullion. Where they go next will be critical. Any hint the Fed may taper because of inflation or labor market strength could see bond rates spike — triggering a repeat of the taper tantrum seen in the wake of the financial crisis, when gold dropped 26% in the space of six months.

“The position I think you get to is a place where it gets to be very vulnerable to the taper narrative,” said Marcus Garvey, head of metals strategy at Macquarie Group.

On the other hand, anything that drags on the global economic recovery — be it poor jobs data or new virus variants — should see real yields plunge, benefiting the metal.

The dollar has been another important driver of gold this year. After initially strengthening as the US vaccination program outpaced the rest of the world, it’s declined since March as other nations closed the gap, providing a tailwind for the precious metal. 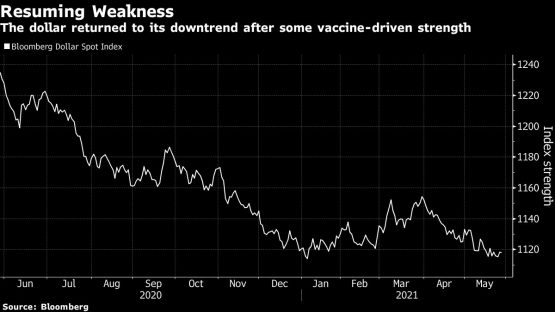 Most analysts don’t see much movement in the dollar going forward, with the median forecast compiled by Bloomberg suggesting only a slight strengthening.

If they’re wrong, be it due to divergence in the global recovery or surprising hawkishness from other nations’ central banks, the implications for bullion could be significant.

Gold’s poor start to the year came as exchange-traded funds cut their holdings of the metal by 237 tons in the four months through to April. Hedge funds trading on Comex also reduced their exposure to the lowest since 2019 in early March.

In the second quarter, flows have started to reverse. If that picks up steam, gold could find another leg higher. 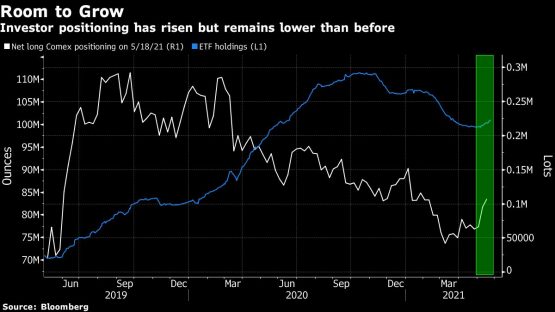 Others, including Aegon’s Robert Jan Van Der Mark, who cut his exposure to gold in November after vaccines were announced, remain to be convinced.

“With vaccination rollout on track and economies reopening, we have less appetite for a safe haven/stagflation type of assets in the portfolio,” he said.

Often touted as digital bullion, Bitcoin’s rally in the first months of the year was demoralising for gold bulls. The two assets are both favoured by those fearful of hyperinflation and currency debasement, so the cryptocurrency’s outperformance may have turned the heads of would-be bullion buyers. Bitcoin has dropped about 40% from its mid-April high, with substantial outflows from funds. Gold could be a beneficiary.

How do you hide or fix that one? 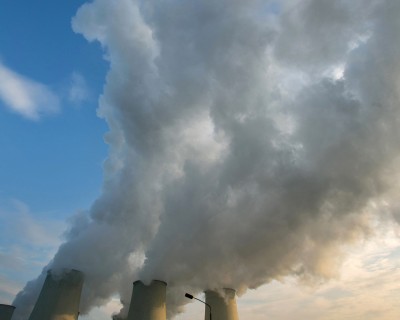