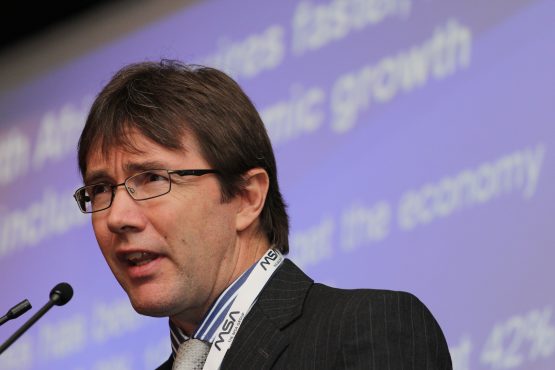 Roger Baxter, chief executive officer of the Chamber of Mines

South Africa’s new mining rules will all but wipe out returns for non-black shareholders, driving other investors from the industry, according to mine owners who are seeking to block the changes in court.

“There would be nothing left for remaining shareholders,” said Roger Baxter, chief executive officer of the Chamber of Mines business lobby. “It’s going to make the mining sector uninvestable.”

A new 1% levy on revenue, to be paid first to black shareholders, would have cost R5.7 billion ($440 million) if applied last year, Baxter told reporters in Johannesburg. That compares with the R6 billion that companies paid in total dividends.

The levy on revenue is among measures in the mining charter that came into force with its publication in the official gazette on June 15. The chamber says the charge will cripple an industry already lacking investment. That’s even before more headline-grabbing moves such as forcing an increase in black ownership of miners to 30%. The charter will see as many as 100,000 job losses, or about one in five in the industry, Baxter said.

South Africa is already seeing employment shrink in the industry as companies struggle to contain costs in aging deposits. AngloGold Ashanti Ltd. said on Wednesday it was shutting operations in a move that may affect 8,500 workers.

Mine owners have applied to block the charter with an interdict and will present their arguments to court on July 18. The legal action is “unfortunate,” the country’s Department of Mineral Resources said on Tuesday. “Those who are in opposition to the Charter are in fact opposing the transformation objectives of government,” it said in an emailed statement.

About R3.5 billion a year would flow to a so-called Mining Transformation Development Agency governed by the department, almost twice its annual budget, according to the chamber. “It has no governance issues in place, Baxter said. “We don’t know or understand what the primary objective is.”

Not acceptable under any circumstances.

If anyone wants a share of the Company, they can dip into their own pockets and buy shares. We in South Africa are sick and tired of putting our money into the begging bowl. It never ends!

The effect of the mining charter is much worse than nationalization of the mines. Investors still have to supply capital and take the risk inherent in mining, while government gets all the benefits of nationalization, but none of the disadvantages.

If the mines where nationalized outright, bankruptcy, unemployment of mine-workers, violent communities and mining accidents would have been government’s problems. Now they can blame all of that on White Minority Capital while they extort all profits from mines in an effort to bribe voters.

South Africa is the first country in the world where a system worse than nationalization was implemented. You can bank on the ANC to come up with the worst schemes on earth.