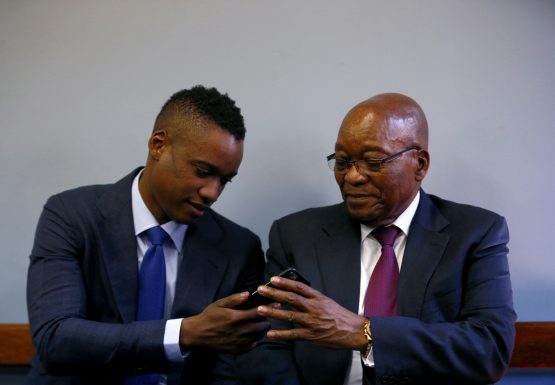 The acquisition of Optimum Coal Holdings (OCH) by Tegeta Exploration and Resources was one of the major events that triggered the establishment of the Zondo Commission of Inquiry into allegations of state capture, and was a central focus of the Public Protector’s report ‘State of Capture’, released in October 2016.

The Public Protector (PP) found that the acquisition was pursued through unlawful means and funded almost entirely by proceeds of crime.

The commission came to the same finding, as outlined in Part VI Vol III of the Zondo Report (pages 80 to 95).

The ultimate beneficial owners of Tegeta were:

The criminal project of acquiring OCM

The criminal shenanigans resorted to by puppets of the Guptas have already been described in the Eskom section of the Zondo report.

Brian Molefe, seconded to Eskom in April 2015, “immediately set about scuppering advanced negotiations between Eskom and Glencore” over a penalty levied by Eskom.

Molefe and Eskom board chair Dr Ben Ngubane wanted to suspend all mining licences to Eskom.

Molefe also scuppered the sale of the Optimum Coal Mine (OCM) to the Phembani Group.

On 22 November 2015 Eskom board member Mark Pamensky oiled the way, and advised Atul Gupta that “Oakbay should ensure that a condition precedent for the OCH acquisition sale should be Eskom’s withdrawal of the R2.17 billion penalty claim” and advised Atul how to get the deal to be accepted by the Eskom board.

Read:
The looting of Eskom, Transnet and SAA by the Gupta media enterprise
Zuma, Koko and Brown assisted the Guptas in capturing Eskom – Zondo
The Guptas catapulted Molefe and Singh into Eskom

When Glencore rejected a R1 billion offer from Oakbay for OCM on 25 November 2016, the Department of Mineral Resources under Zwane issued spurious notices under the Health and Safety Act in an attempt to shut down Glencore mines.

Glencore caved, and then Tegeta had to come up with the cash.

Former Eskom executives Matshela Koko and Anoj Singh “prepared a motivation for Eskom to prepay Tegeta R1.68 billion*” for a year’s supply of coal, despite the fact that Hendrina appeared to be oversupplied.

The Eskom board unanimously adopted the resolution to pre-pay the coal in December 2015, even though this was clearly in the interests of Tegeta and not Eskom.

By early April 2016, Tegeta was short of R600 million, and Eskom made another prepayment of R659 million. The board signed off, and the payment was rushed through on 13 April 2016 by Singh and Molefe.

The R2.1 billion for Optimum was sourced from criminal funds

The funds used for the acquisition were for the most part proceeds of crime, detailed below:

It is a criminal offence to receive proceeds of crime

The Zondo Commission referred to Section 2 of the Prevention of Organised Crime Act (Poca), which makes it a criminal offence to receive proceeds of crime.

The commission is of the view that there are reasonable grounds to believe that Duduzane Zuma, Salim Essa, Ronica Ragavan, Ashu Chawla and members of the Gupta family may be guilty of contravening Section 2 of Poca.

*The Zondo Report erroneously states R1.68 million, instead of R1.68 billion – this figure has been corrected in this article.

The public at large already knew this towards the end of 2016 already !! It is now 6 years later and these clowns are still walking around without fear of justice because they are above the law !!!

This is not just Criminal Enterpeize Ala Gupta, it’s criminality Ala ANC.

South Africans of all races are suffering “Corruption Fatigue”. We are no longer shocked by the stories of corruption by the politically connected and their mates….perhaps this is exactly what they want – to wear us down until we no longer care and allow them to continue robbing the taxpeyer, rate payer and all South Africans who love this country. Would be really great if the President grew a pair and put an end to all this including the speculation that he himself might be involved.

What is the status of Tegeta now – is it operating and printing cash from high coal price and paying dividends to these thieves?

The mine was definitely purchased with criminal funds, that much in the heading is spot on. However, lets be a little more direct if possible.

Unless my math/ facts are out, there is a typo which then carries through the rest of the article and table?

The first upfront payment to Tegeta was R1.68 billion not million. For context R1.68m at that time would have purchased approx 100 side tippers of coal. A large power station consumes 1,200+ trucks per day! I doubt a years supply of coal from Optimum as such equates to R1.68m/ 100 truck loads (that is more like 2 hours supply). The second upfront payment of R659m I believe is correct.

We have 2 hasty upfront payments made of R1.68 billion and another R659 million. So ESKOM paid a total in upfront coal purchases of R2.4 billion. Optimum was sold for R2.1 billion – I wonder where the other R300 million went? So ESKOM purchased OPTIMUM – can they (the state and the people of SA) have it back? With a cheque for R300m plus interest?

Tongue in cheek aside – deployed ANC cadres in MOLEFE and SINGH, arranged the equivalent of vendor finance for the purchase of OPTIMUM – with a spare R300m for incidental costs at Mall of Emirates, 1st class tickets etc

A cynic might interpret this transaction – as the ruling party arranging the purchase and funding of Optimum, for the privileged few, which were certainly not limited to the Guptas and others mentioned in the article.

I wonder how Tegeta accounted for the upfront payments and then used them as Capex?

You’re right – apologies for the oversight!