Palladium’s wild rally at risk from recession later this year

This year’s stunning gains are looking fragile on signs exports will be maintained and that demand from automakers could suffer.
By Ranjeetha Pakiam, Bloomberg 14 Mar 2022  09:59 Palladium’s wild ride following Russia’s invasion of Ukraine is likely not over yet. But this year’s stunning gains are looking fragile on signs exports will be maintained and that demand from automakers could suffer.

The metal — about 40% of which is mined in Russia — shot to a record high last week due to nervousness over restrictions on the country’s banks and concern that flight bans would make it difficult to supply global customers.

It’s since retreated on indications that exports won’t be as badly hit as first thought, but is still up more than 40% this year. The world’s biggest producer, MMC Norilsk Nickel PJSC, can redirect cargoes via alternate routes, despite the suspension of air links with Europe and the US, said Vladimir Potanin, the company’s president.

Palladium may also fall victim to accelerating inflation and a slowdown in global growth caused by the war in Europe. Automakers consume about 85% of the supply to make pollution-reducing catalytic converters in gasoline engines, and may also hasten efforts to switch to the much-cheaper platinum instead. 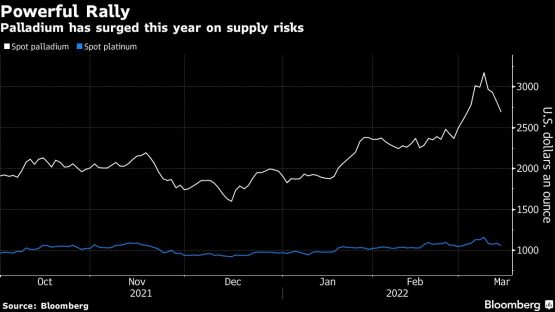 “We continue to see very volatile and extreme price action in the first half of the year — with price risk to the upside,” said Nicky Shiels, head of metals strategy at MKS PAMP SA. “But recession fears are rising with demand expected to be dampened into the second half,” at which point the price risk switches heavily to the downside, she said.

While palladium hasn’t been hit with sanctions, Russia’s increasing isolation is still affecting supply. Some customers are considering canceling their contracts with Norilsk Nickel, while investment plans might be postponed, Potanin told Russia’s RBC newspaper over the weekend.

Whether Norilsk can continue to deliver palladium against its long-term contracts and into the spot market will be key for the metal’s trajectory, said Philip Klapwijk, managing director of Precious Metals Insights Ltd. in Hong Kong. If Moscow were to instruct the company to restrict supplies then prices could go much higher, he said.

South Africa is the other major supplier, accounting for around 30% of global supply, while Canada and the US also produce palladium.

Recession risks are looming. There’s a growing chance vehicle output in 2022 may be weaker than expected, Metals Focus Ltd. said in a report dated March 9. The war could lead to a big increase in platinum demand, the World Platinum Investment Council said last week. The council said it already sees 340 000 ounces being substituted this year, 70% more than in 2021.

“In the near term, strong support and even decent upside, triggered by Ukraine-related news coming out, are certainly on the cards,” said Nikos Kavalis, managing director at Metals Focus. “But as our base case is that metal flows will in one way or another continue, this bull run will dissipate later in the year.”