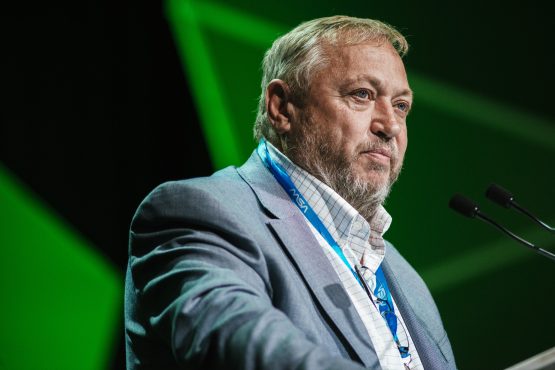 When the world’s biggest platinum miners sit down with labour unions this month to negotiate a three-year wage deal, it could prove an early test of Cyril Ramaphosa’s new presidency in South Africa.

An amicable outcome will bolster Ramaphosa — the former mine union leader and one-time platinum company investor — as he seeks to lure foreign investors. However, tensions are fraught on both sides and there are fears the labor unions will go on strike, which could send platinum prices soaring.

“Ramaphosa’s key priority is to send a positive signal on reforming economy, but there will be high levels of instability after the election,” said Andre Duvenhage, professor of politics at North West University. “The platinum belt is probably the most volatile environment in South Africa.” Khusela Diko, a spokeswoman for Ramaphosa, declined to comment.

The industry is bracing for a tough round of talks. The Association of Mineworkers and Construction Union, the largest and most militant labour organisation in the sector, is expected to push for higher wages as the industry reaps windfall profits. Across the negotiating table, some producers have accumulated cash to withstand a repeat of the prolonged and violent strike in 2014.

Preliminary wage talks should start this month, according to Johan Theron, a spokesman for Impala Platinum. The negotiations will pit Amcu and three other labour unions against at least seven producers, including Anglo American Platinum and Sibanye Gold. Optimists can point to the relatively smooth negotiations during the last wage round three years ago, when Anglo American’s platinum unit was first to agree a deal with Amcu. The union accepted an increase of 12.5% for the lowest paid workers, after initially demanding a 47% increment.

However, some fear Amcu is gearing up for industrial action after South Africa’s regulator threatened to deregister the union for failing to hold a regular congress and leadership elections. That could potentially impair the union’s ability to negotiate with mining companies and collect dues from its members. “The likelihood is that workers may be upset and go on a strike again,” said retired Anglican Bishop Johannes Seoka, who played a key role in mediating an end to the 2014 dispute. “That will impact negatively on mining, which is already struggling. Workers will lose.”

Deregistering Amcu could have far-ranging repercussions, said Crispen Chinguno, a senior lecturer in sociology at Sol Plaatje University in the Northern Cape province.

“It may push Amcu to adopt a more combative strategy in its struggle for survival,” he said.

Amcu leader Joseph Mathunjwa, who has long been critical of the ruling African National Congress, said there’s a political agenda behind moves to deregister the union. When asked last month, he declined to say who he thought was behind the move, but asked: “Who are the richest black people in South Africa?”

Platinum-group metals are one of South Africa’s biggest exports, but less than year ago producers were closing shafts and cutting thousands of jobs as a stronger rand combined with stagnating metal prices to squeeze profit margins. Another platinum strike would hurt both the industry and the unions, according to Peter Major, a mining analyst at Mergence Corporate Solutions.

“There is no more commodities boom, and no money for mining investments in South Africa,” he said. “This country’s economy is on its knees and mines are really shedding jobs.”

Some producers are yet to recover from the 2014 strike, which cost about $2 billion in revenue. More than half of nation’s production of PGMs is either marginal or unprofitable, according to the Minerals Council of South Africa, a lobby group that includes most of the mining companies operating in the country.

As platinum-industry investors gather in London this week, they will be casting a wary eye toward South Africa. Miners’ earnings have rebounded on a weaker rand and rally in palladium and rhodium prices, but some producers seem in little mood to compromise.

“Don’t try to force our hand with a threat of a strike, because quite honestly we will take a strike,” Sibanye chief executive officer Neal Froneman said in an interview in Johannesburg. “We are not intimidated by those types of things.”

If Amcu don’t trust the ANC and CR as having a hidden agenda who is supporting their efforts in return? Could it be that the red beret brigade are undermining the mining industry? If so, who is providing this party with the economic support needed to take on the mining industry? The sooner we know who is financing the political parties, the sooner we can have a transparent and fair society and more job creation. Rather have a situation where there are more jobs at less pay than no jobs at no pay. Industrial action only destroys job opportunities. The unions should be negotiating for more jobs in this sector not more money.