As business rescue of Koornfontein and Optimum appears to be drawing to a close.
By Ciaran Ryan 9 Jan 2020  00:04 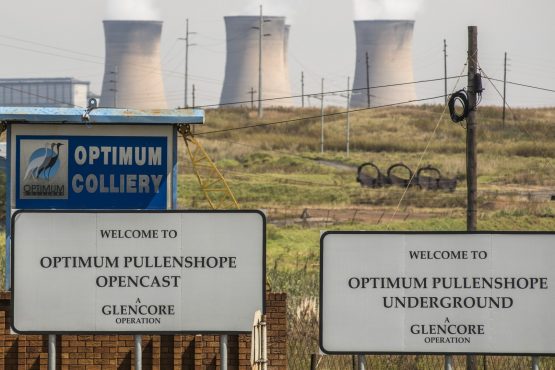 Signs for Optimum Pullenshope opencast and underground mining sites stand at the entrance to the Optimum Colliery. Image: Waldo Swiegers/Bloomberg

Two of the remaining key assets in the now defunct Gupta empire – coal mines Koornfontein and Optimum – are the subject of yet more litigation, coming on top of the roughly 50 court cases batted away by the business rescue practitioners (BRPs) over the last two years.

A company called Westdawn is owed R112.5 million by Optimum and is the latest to bring a court action against the mine and the BRPs. It has filed an application in the South Gauteng High Court calling for Optimum Coal Mine to be liquidated on the grounds that it is “factually and commercially insolvent and unable to pay its debts”.

It previously applied to court for the liquidation of Koornfontein for largely similar reasons.

Deposing for Westdawn, insolvency practitioner Chavonnes Cooper of CK Trust says there never was any prospect of rescuing Optimum and that it should have been liquidated some time ago. “What the BRPs have done however is to propose an informal winding up of the company, ostensibl[y] disposing of its assets under the auspices of business rescue.”

Read: Miners survive on charity while battle for Koornfontein mine drags on

Westdawn, a mining contractor, says it is also a creditor of Koornfontein. It disputes the claims of Eskom and Centaur Investments as being “alleged contractual penalties” which therefore constitute contingency claims that fall under the Conventional Penalties Act. At a creditors’ meeting in December, Centaur and the creditors’ committee challenged Eskom’s voting rights.

The matter will now go to arbitration later this month to decide what weight Eskom should be given in deciding the way forward for the mines.

Three different business rescue plans for Optimum have been published.

The first, published in April 2018, suggested creditors would receive 12c in the rand for their claims. Eskom was claiming R1.6 billion in penalties for the non-delivery of coal to its power stations. While Eskom was paying Koornfontein R430 per ton for its coal, Optimum was getting less than half this. Centaur was not listed as a creditor in the first rescue plan.

The second rescue plan was published in December 2018 and proposed offering Eskom R1.1 billion for all its claims, while Centaur also had claims totalling roughly R1 billion. The BRPs proposed offering it a pre-commencement dividend of 71c in the rand. Both Centaur and Eskom received voting rights equivalent to their claims.

Centaur had previously brought an application before the high court in an attempt to interdict Eskom getting a vote in the Optimum business rescue proceedings. That application was later withdrawn by Centaur “pursuant to a settlement agreement allegedly entered into between the BRP’s, Eskom and Centaur,” says Cooper.

Westdawn had total acknowledged claims of about R320 million in the second plan, but these were inexplicably reduced to R112.5 million in the third plan.

Cooper says Westdawn’s claims were changed unilaterally, nor was it offered a dividend.

Cooper says the business rescue process does not allow the same checks and balances that exist in liquidation proceedings. Decisions of the master of the court to accept or reject claims in a liquidation can be taken on review in court, whereas in rescue proceedings the BRPs “have the sole right to admit the claim and quantify it”.

“A claim for damages, which we submit is the basis of the claims submitted by both Eskom and Centaur, would not be proved so easily in a liquidation scenario. In fact, it is only upon being empowered to do so by creditors, that a liquidator would be able to settle a claim for damages with a creditor failing which settlement that creditor would be obliged to institute an action in order to obtain an award,” says Cooper’s affidavit.

“The effect of the BRPs’ decision is to place the entire future of Optimum, insofar as it relates to its business rescue proceedings, in the sole discretion of Eskom and Centaur.”

Attorney for the BRPs Bouwer van Niekerk says all the cases, including that brought by Westdawn, are being opposed.

Then there is the case brought by BEE mining group Lurco late last year to interdict the BRPs from selling Koornfontein to Black Mining Royalties (BRM), on the grounds that its much more generous bid of R500 million – about R200 million more than BRM’s winning bid – was defeated by an “irrational” change to the business rescue plan that required money to be deposited within five days.

This was impossible as Lurco’s funding had to be moved from an overseas bank account, which takes up to six weeks.

Another case, brought by Amin Al-Zarooni – chairman of Charles King SA – claims the Swiss-based company has a written agreement signed in 2017 to purchase the Gupta holding company Tegeta for R2.9 billion.

The R64.4 million that was deposited was used by the Guptas to pay salaries at various Gupta companies, including Optimum.

The Charles King case was rejected for lack of urgency in 2018, and will now go to arbitration.

Rescue practitioner Louis Klopper says the BRPs are required to execute the mandate of the creditors, and that the sale of Koornfontein will not be delayed by the pending court actions.

…..and still not one person arrested, or charged, or convicted.

Never will happen they Zuma’s friends. He is still in the shadows……