The rise and rise of SA’s bulk commodities This was a week of clangers in the mining sector: the once mighty AngloGold Ashanti no longer features on the top 10 list of mining companies as measured by market cap; the ongoing collapse in the rhodium price (now half of where it was in April); and the realisation that SA’s coal sector might be around a lot longer than environmental lobbyists would prefer. 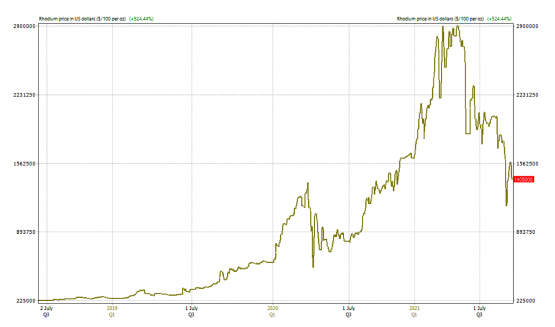 Rhodium accounts for a relatively small part of platinum group metal (PGM) mining by volume in SA, but has a much greater impact on profits. The graph above explains why.

That also accounts for some of the recent drop in share prices of PGM producers like Impala Platinum, whose price is down 37% since May. As Moneyweb previously noted, rhodium may have accounted for just 6.5% and 7.5% of Implats’ and Amplats’ mineral output, but it gifted these companies 25% and 34% of their total revenue in 2020.

Read: How a tiny by-product metal is making billions for PGM producers

The latest drop in price suggests we are headed into less frothy waters, through rhodium continues to change hands at prices well above 2019 levels.

Declining demand from the automotive sector and a scarcity of semi-conductor chips is behind the recent plunge in the metal price.

The outsized contribution of PGMs to SA mining was emphasised in the latest PwC SA Mine report, published this week, showing PGMs accounted for 38% of total mine sales in financial year 2021, following a doubling in sales over the previous year.

The other major story to emerge from the PwC report is the growing importance to mining of bulk commodities such as iron ore and coal.

Coal and iron ore contributed 37% of total mining revenue in 2020, and 31% in 2021, despite a 20% improvement in revenue. The declining contribution from these two bulk commodities is distorted by the doubling in revenue from sales of PGMs over the last year.

Coal sales were more or less unchanged at R133 billion in 2021 versus 2020, but SA’s high quality iron ore attracted a hefty premium as the world economy rebounded from the Covid collapse. Total iron ore sales jumped 59% in 2021 compared to 2020.

Speaking at the Mining Indaba this week, Kumba CEO Themba Mkhwanazi said the global steel industry is under increasing pressure to decarbonise, as regulators are setting more ambitious carbon neutrality targets. Canada, the EU, UK and Japan have set themselves targets to be carbon neutral by 2050, and China by 2060.

Climate change is accelerating a flight to quality, and this is to the benefit of companies like Kumba which, as part of the Anglo American stable, has revolutionised mining with the introduction of technologies designed to minimise environmental impacts.

Read:
Anglo’s seen the future of mining, and it looks a lot like farming
Anglo set out to reimagine mining, and the $2bn payoff has arrived

These include the use of hydrogen-powered trucks, the build-out of solar powered energy plants and the reinvention of virtually all aspects of the mining production chain.

July Ndlovu, CEO of Thungela Coal, told the Indaba that coal will remain a key part of the energy mix into the next decade, maybe longer.

“We think Thungela represents a new generation of coal value players. We think sometimes our value chain is not understood, and we can co-exist [with green energies] going forward,” he said.

The world is not confronted with a binary choice between fossils and renewables, as the transition away from fossil fuels will take decades to complete.

Coal remains essential to 80 countries, and for many of them coal will remain the key energy source well past 2040. The pathway to green energies goes through coal, said Ndolvu, adding that clean coal technologies are not a myth, as some environmentalists have claimed, and are likely to extend the lives of coal producers, perhaps by decades. These technologies eliminated two gigatons of carbon in Asian economies in 2018.

Transnet’s current capacity is 60 Mt a year, but over the past three years it has managed just 58 Mt.

The country loses some R5 billion a year due to this unrealised export potential, in addition to the loss of revenue to Transnet.

SA is a niche but high quality player in the world of iron ore, said Joubert, and needs to partner with Transnet to achieve its export potential. New management at Transnet Freight Rail (TFR) is much more transparent than the previous team, and a solution to the supply constraints is only possible by partnering with the organisation.

It’s the broken SOE’s, like Transnet, through ANC corruption and mismanagement, that is the issue, alongside damaging ANC policies, including the patronage system.

We have an ANC problem.

Andre Joubert from ARM should with Kumba consider building a private railroad to augment the Transnet export capacity.Some of the billions paid to shareholders can be applied to achieve this.

The Business Analysts were so very wrong about PGM(s).
I watched BD TV every evening, Wednesday night one analysts says no stay clear of AGL, the next day it was up 5%.

Some were saying stay clear of SSW, up Thursday from R46 to R54 now and the list goes on.

Don’t buy them, I will every month.

The fact is that our SA resource shares are at the 33% of the price they should be, they are sitting on more cash than some banks, plus paying record dividends.

The mining sector is very small compared to the rest of the stock market.

You cannot print precious metals , iron ore and coal like the US prints paper Dollars.

Guys don’t always believe what Business Analysts tell you,
if they say turn right, then please turn left, they are 90% wrong most of the time or lying to us.

The guys on D B T V were so anti resource stocks even cash flush , low debt and P/E of 3.

The resource stocks are up 20% in two weeks.