Despite coronavirus disruption, Harmony’s share price has more than doubled so far this year.
By Ciaran Ryan 17 Aug 2020  00:01 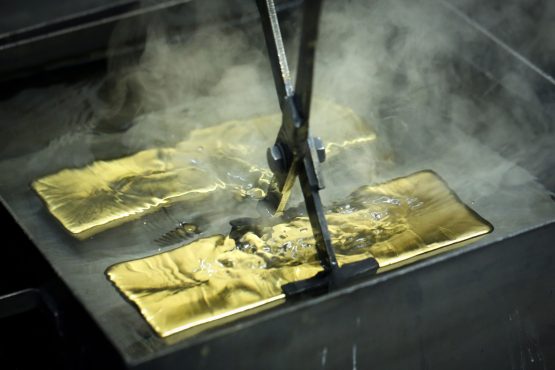 Unprecedented demand in a year when production is likely to fall could push the gold price up further. Image: Andrey Rudakov, Bloomberg

The gold price cracked $2 000/oz in early August, driving gold shares to the kind of giddy levels last seen in 2012.

Harmony’s SA operations managed to achieve nearly 75% of planned production during the last quarter of the financial year, which was higher than initially expected. However, total annual gold production was 15% lower at 37 863kg, or 1.2 million ounces, mainly due to the lockdown.

Costs across all operations are expected to be between 17% and 19% higher at about R645 000/kg to R655 000/kg, but will be less than half this when measured in US dollar terms. Harmony is reaping the benefits of a strong metal price and weak exchange rate.

Anchor Capital resource analyst Seleho Tsatsi says the company has hedged about 20% of its gold production at around R650 000/kg into 2021, which may take a little froth off revenue should the spot gold price continue moving higher.

“The results from Harmony were pretty strong mainly due to the gold price. There were factors beyond their control, such as the lockdown and the complications around restarting production,” says Tsatsi. “It’s always a bit of a gamble when gold miners hedge prices at which they sell gold. This works in their favour when prices are falling, but works against them when they are rising. Harmony still sells the bulk of its production at spot prices, so this will benefit it should the gold price continue going beyond $2 000/oz.” What might keep the gold price moving up? For one thing, unprecedented demand in a year when production is likely to fall 10% according to the World Gold Council.

Staying with precious metals, Northam Platinum is printing cash as it reported record results despite losing production during the lockdown.

This is reflected in a trading update issued last week: sales volumes amounted to 582 686 ounces, which included ore sales, while total revenue per platinum ounce sold increased by 78.8% to R53 009/oz, resulting in a cash margin per platinum ounce in excess of 40%.

It expects headline earnings per share to be between 562.40c and 621.60c, compared with 15.80c in the previous year. Tsatsi says Northam is one of few platinum companies with a growth story, as it will likely hit one million platinum group metals ounces within the next five years. To increase cash payouts to shareholders it has embarked on a share buyback of Zambezi preference shares (Zambezi is its empowerment partner), which the company believes is the most efficient way of returning value to shareholders. 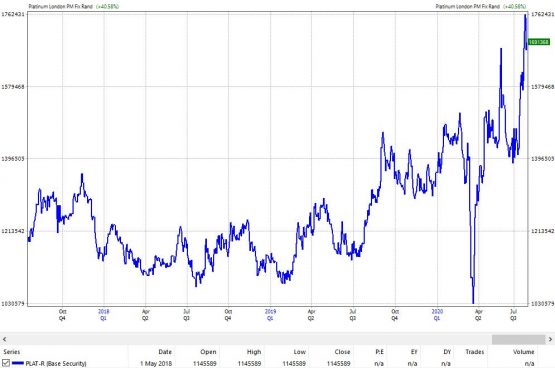 Glencore decided to scrap its dividend and instead focus on scaling back debt, which climbed 12% to $19.7 billion for the half year to June 2020. The group reported a $2.6 billion loss for the half year despite record $2 billion operating profit from its trading division. Like its peers in the oil market, Glencore stocked up on cheap oil earlier this year and later sold it back into the market at higher prices.

The group plans to reduce debt to about $16 billion, which would strengthen the balance sheet heading into the second half of the year. Copper production was down 11% to 588 000 tons in the first half, and is expected to reach 1.225 million tons for the full year. Cobalt production was down 33% in the first half, while zinc output at 550 000 tons was in line with the same period in 2019. Nickel production likewise held steady at 55 200 tons, though coal output was down 15% to 10.1mt due largely to Covid-related disruptions in Colombia.

Tsatsi says investors were clearly disappointed with Glencore’s decision to hold back on dividends, while concerns remain about regulatory investigations in the US, UK, Brazil and, most recently, Switzerland, relating to claims of corruption and bribery, principally in Congo, Venezuela and Nigeria. The company has announced a change in senior management in its zinc and coal businesses within the last two months, most likely related to the multiple investigations it is facing.

Diversified miner Exxaro, which supplies coal to Eskom, has opted to pay an interim dividend, saying it fared well amid SA’s lockdown due to record coal exports and a weaker rand. Revenue for the half year to June increased to R14 billion from the R11.96 billion posted in the corresponding period in 2019. Its diluted earnings per share increased to R17.13, and it chose to pay out an interim dividend of 643c a share.

Exxaro is a tale of two different businesses, one doing well (iron ore) and the other rather poorly (coal).

Export coal demand is likely to remain weak in the second half of the year, while domestic coal supplied to Eskom should be fairly stable as industries return to normal production.

Chinese demand for iron ore is benefiting from a modest rebound in ex-China steel output. China’s iron ore port inventories will likely rise towards the end of this year, leading to a softening in the iron ore market.